3LAMESTUDIO is a peculiar troll who makes animations on Youtube that Youtube users often describe as strange, odd, weird, bizarre, autistic, cancerous, unusual, creepy or most commonly cringeworthy. Furthermore, the troll gained a lot of traction back in 2014 (aka the golden age of cringe compilations) for his rather mediocre, yet extraordinary animated videos on Youtube by receiving a lot of hate comments coming from cringe centered Youtube channels, notably Sir Cringe, Tucker, Cybernik The Robot, Trigger Happy, NFKRZ, Retroh and many others who either used snippets of animation or entire videos from the troll's channel.

Why he's a troll[edit | edit source]

The intent of the channel is to make cringeworthy animations to get popular quickly by bringing in angry ANTI-CRINGE MEMELORDS and hate comments.

So, his videos only exist to get into people's nerves. This is similar to how Seadoco operates to gain attention.

Ultimately, it is a baiting troll. Once again, comparable to Seadoco, Our Third Life and perhaps Super Minecraft Kid.

Not much is known about the troll, except the fact, there were rumors and allegations spread about the troll claiming the troll genuinely had autism. Those allegations were spread the most by Encyclopedia Dramatica and the troll himself with videos like this one. Whether the troll is actually autistic or not has yet to be proven.

3LAMESTUDIO does not show his face on his videos, but his profile picture of a man doing a high kick could be him. If it is him, he is then clearly a white (possibly tanned) Asian man. According to Kiwi Farms (See sources), he is Arabic.

His voice, but highly modified, can be heard in some of his videos, which further confirms he's a boy and he has an eastern accent. 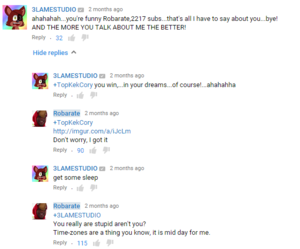 While the troll is still a troll, he is also incredibly hypersensitive which is something that is rare among trolls.

The troll often writes extremely aggressive one-liners to his haters or make music videos against his haters whenever they piss him off well enough. On the same note, he harassed some of his detractors on either Twitter or Youtube which is pretty childish.

Other than that he is completely oblivious to how people see his videos. Whether that's done purposely or not is still up to debate.

As evidenced earlier, the most notable thing about this troll is his really strange videos which are again described as "cringeworthy", but not only that! The troll has several notable obsessions over some trends, franchises and people as explained further down below.

The troll has several obsessions and those are always centered around stuff that is both popular and has a toxic fanbase, that excludes MLP and Furries for unknown reasons. This is once more, comparable to trolls like Super Minecraft Kid or Sonic trolls, Furry trolls, Undertale trolls, etc who take the appearance of a fanboy coming from either of the communities in question because trolls know that will get them a lot of attention and notoriety from angry people if they decide to act as if they were some braindead children from an unpopular community.

Throughout the years he made a lot of different videos and put them together to make Youtube series.

His most popular series is called "The Freddy Fazbear show".

Other than that, he made a lot of "Versus" videos where two characters are fighting one another.

In early 2016, he made a pretty racist music video on Barack Obama, viewable here. It caused some outrage, but it was not that much compared to most outrages on Twitter in 2019. Anyway, he disabled the comment section and the ratings on that video because of the backlash.

Around May of the same year, he hid every single one of his videos, except a few videos of him drawing (If we consider he didn't steal said videos). For several months, only those specific videos were available publicly with only 4 videos in total that could be watched. After that time passed, all his private videos were public again (although some of the videos were straight-up deleted).

Additionally, 3LAMESTUDIO has made himself a big target for criticism by stealing ideas or ripping off assets from other sources. A list of the ripped assets can be found below in a bullet list.

It has been over 6 years now that 3LAMESTUDIO used ripped assets rather than making his own.

Some of his "phenomenal" videos[edit | edit source]

His animated video on Angry Birds has always been the featured video/trailer of the channel ever since it was put there, it is probably why it has over 1 million views nowadays.

There are multiple posts dedicated to the troll on r/fnafcringe .

Some trolls got inspired by 3LAMESTUDIO.

3LAMESTUDIO is into random humor and edgy humor, the aforementioned video on Obama is one example of edgy humoristic video. In regards to the random humor, he will make characters go erratic (Probably inspired by PilotRedSun) and make them burp at random intervals.

You can find the following description on his about page:

I create bizarre videos about Angry Birds, Minecraft, Super Mario, and so on and so forth... Subscribe if you want to enjoy the future...

Prior to 3LAMESTUDIO changing the main language of his channel to Italian, 3Lamestudio was gaining very little views on his videos. His last video in English, which was uploaded on the 27th of April 2019, had only 108 thousand views and one video prior to that one had less than 50 thousand views. The language change seems logical when you account for all the views he gets now.