4chan is a website where internet users can anonymously discuss about different topics on different boards. It is currently being visited by over 20 millions internet users on a monthly-basis and it has over 1 billion posts as of 2018 (including deleted and archived posts).

The website is currently owned by a Japanese business as of 16/08/19.

Why is it on Trollpedia[edit | edit source]

Although 4chan is not a website made by trolls, unlike Kiwi Farms and Encyclopedia Dramatica, it is THE website that gathered all the internet trolls together and other types of no-life into one single place to cause most of the biggest chaos over the net. The fact that 4chan is anonymous would mean users of the website can plan raids or talk shit about other people and never get punished for it, 4chan is notorious for that reason alone.

The boards with the biggest amount of trolls are /b/, /pol/ and /v/. 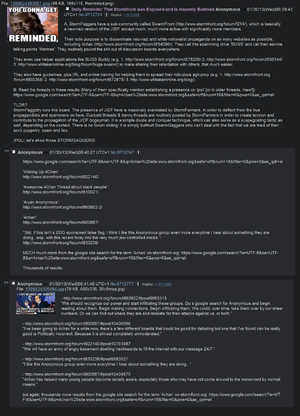 Originally, the website was designed mostly for Japanese and internet culture, but users from a neo-nazi/white supremacist forum called Stormfront invaded 4chan in 2011 and turned 4chan into a place where hatred, racism and sexism could prevail.

The infamous board known as /pol/ was designed to be used for news and politics, but when Stormfront invaded the website, they turned that board into a place for neo-nazi/white supremacist recruitment.

In addition, this board would help them spread their dogma to the entirety of 4chan infecting every other board and slowly radicalizing 4chan's users.

/b/ mostly contains shitposts, pornography, several gross-outs and memes, Pepe the frog and Wojak being the most prominents. 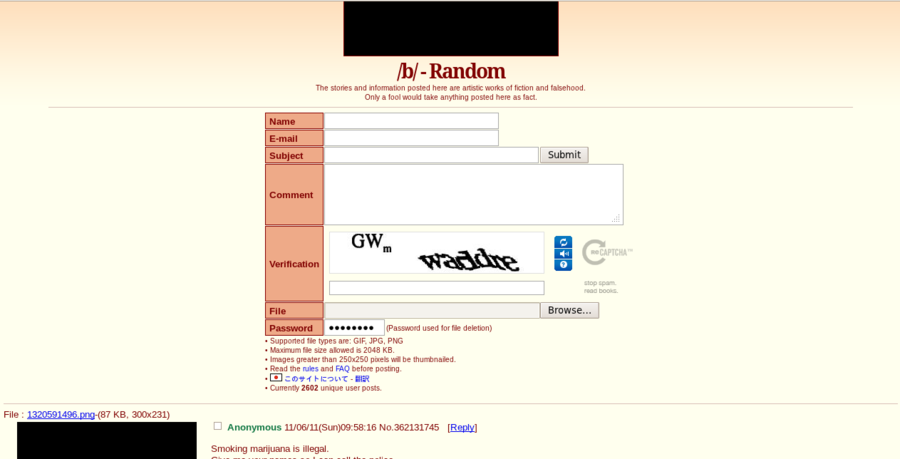 The first thing you'll see upon entering /b/.

/pol/ is where you can find the Neo-Nazis. It is famous for most of 4chan's biggest raids, most of 4chan's biggest propagandas and the constant posting of nazi imagery. In rare occasions, you may find illuminati conspiracists, Conservatives, Republicans and other right-leaning individuals, but they may show up time to time to complain about the government itself rather than promoting Adolf Hitler.

/v/ is similar to /pol/ in several aspects. They love to promote some games and hate on other games (generally the games that promote a left-leaning political agenda or those that are from specific game companies).

/a/ is the board dedicated to anime, there are very few trolls on that board with mostly actual degenerates.

/r9k/ or ROBOT9001 is allegedly the autistic board of 4chan, followed by /b/. One rather notable thing is the fact most of the users there are peaceful in contrast to boards like /pol/ or /b/.

/lgbt/ is the same as /a/, but with more homosexual people.

/h/ is the place where users can post hantai.

/vg/ is the same thing as /v/, but with less activity and more centralized discussions.

/mlp/ is also the same as /a/, but with bronies instead of weeaboos.

/fur/ used to be an actual board like /a/ and /mlp/, but for furries. It's been removed on April's third of 2005 due to controversy and all the users who posted there, regardless of the reason why they posted there, were banned from 4chan as a whole.

/leftypol/ is the same thing as /pol/, except it's leaning to the Left rather than the Right.

/x/ is a board about paranormal. Many 4channers have managed to resolve several internet mysteries from this board.

/tv/ is the board about television, simple as that. There is sometimes arguing over there.

Some of the biggest achievement of 4chan's trolls[edit | edit source]

4chan appeared on news outlet several times due to the trolls doing illegal things online, such as doxxing, DDoSing, raiding and hacking. In one case the reporter thought that 4chan was a hacker and not a website which created a meme in the meantime (Learn more here).

On the 5th of November 2014, 4chan was sued for a homicidal picture that was uploaded onto their servers.

As stated further down below, 4chan is infamous for causing suicide, one of them was Katy Robinson who will later be remembered as an internet meme.

Epstein's death was predicted on 4chan way ahead before it appeared in the news on the 10th of August 2019. The police is now investigating 4chan because of this: 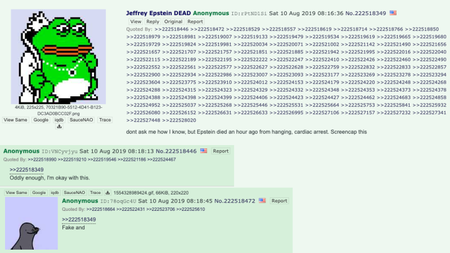 He knew about Epstein's death before everyone else.

4chan and the 4channers are famous for most of today's internet memes. In fact, most of the people on 4chan have an extremely good affinity with memes, particularly the anons who frequently use /b/ and /pol/. Wojak the guy with the feels and Pepe The Frog aka the biggest shitter on this planet are the two most popular memes on 4chan, but there are several other memes to take note of.

One of them is pedobear which is a seemingly anime/manga-like bear with black eye sockets that is used to call out Pedophiles or Pedophiliac media by plastering the bear next to it or by plastering a seal of approval with the bear on it.

Jeff The Killer is a photoshopped image of Katy Robinson who had committed suicide following the restless bullying she was receiving from 4channers.

"It's okay to be white" is a controversial slogan/catchphrase printed on paper made by trolls to expose anti-white racism in America which worked well and made some feminists look like sensitive freaks.

"Weaponized autism" is a meme relating to the fact that 4channers are extremely obstinated whenever they're working on something which oftentimes results in someone getting doxxed or arrested.

There are plenty of memes, posted, stolen and eventually created on 4chan, but we will end this section with the NPC (Non Playable Character) meme which is a representation of someone parroting themselves like an NPC from an actual video game. It is often used to mock some feminists due to the fact they refuse to change their mind.

Kek and the Kekistan is both a not a meme, but more of and a philosophy among 4channers.

Kek is oftentimes used by 4channers as an alternative to "Ok", "Okay" or "K" (On a sidenote, "Lulz" is a corruption of "Lol" and it's used a lot by 4channers too).

Although not a troll organization per se, the Kekistan is something 4channers are heavily linked to. The name is a portmanteau between the word "Kek" and the word "Pakistan/Afghanistan"

Big man Tyrone made several videos commissioned by 4channers for the Kekistan. One of said videos can be viewed on this link: https://www.youtube.com/watch?v=cRIyXtHqBRo

Outside of 4chan's culture, Kek is the god of death and eternal darkness represented as a frog (Learn more here).

There is one 4chan user called QAnon or simply the letter Q who makes cryptic "predictions" on 4chan. QAnon, also called by some 4channers as "Queer Anon" is a user supposedly high ranked in the government who has access to lots of documents. The conspiracy behind that specific user is that he/she predicted events, such as deaths. There is currently a dedicated website for all the prediction QAnon makes. Trump once tweeted something related to Q on his Twitter profile.

The hacking group "Anonymous" was created on 4chan. They are a Leftist partisan hacktivist group that have issued several DDoS attacks in the past against corrupt corporations and from time to time they garnered informations on government officials. The best example of their achievments was when they attacked Sony for being corrupt. The group nowadays is not nearly as active as they used to be in the last decade. Anonymous was founded in late 2003. A full list of all their known exploits can be found on Wikipedia.