AndreJ_HD is a Youtuber with a minuscule fanbase (3K subscribers and averages 300 views on his videos). He makes Youtube videos on mobile games, most of which is Geometry Dash.

AndreJ HD has been actively harassing bigger Youtubers than himself such as Sid Alpha, BigFryTV, IGP, IcyCaress, NoBlackThunder and Anthomnia just to name a few, for criticizing a game called "Day of Dragons" ever since December of 2019. Ironically enough, he harassed the developer of the game too for whatever reason. 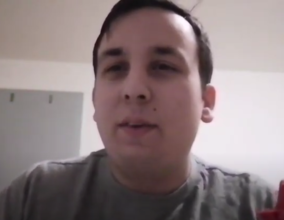 He is a grown Caucasian man and he is visibly chubby.

Assuming his username is his first name and 1 letter of his surname, that means he would be called Andre in real life.

He lives in Serbia.

He allegedly has autism.

The troll has been using several forms of harassment on both Youtube and Twitter to intimidate critics of Day of Dragons.

The first known form of harassment from AndreJ comes in the form of stalking his victims on Twitter and talking shit about them. On Twitter, he responded multiple times to people using reaction GIFs to mock them and he accused the people he harassed of harassing himself. That was likely done in order to deflect the criticism to his targets and make them look like hypocrites.

Unfortunately for him, his behavior is so much worse compared to anyone else involved in this situation.

Additionally, most of his victims stayed quiet about the issue to avoid bringing him bad attention.

At some point, AndreJ HD was urging a hacker to hack the people that he was actively harassing on both Twitter and Youtube. The hacker posted the discussion he had with AndreJ HD onto his Twitter timeline. (Proof!) Andre then asked more hackers to go after NoBlackThunder and one of the hackers accepted, but nothing happened yet. (Proof!)

Since AndreJ HD could not bribe a single competent hacker into hacking Sid Alpha and his peers, he instead decided that the best way to get rid of them was by massively reporting them on both Youtube and Twitter. AndreJ HD asked his followers to falsely report them, however, that did not work either. (Proof!)

This list includes all the pals of Andre that participated in the harassment campaign against the people that were critical of Day of Dragons, alongside AndreJ HD himself. It is unknown if they are alt accounts or not, but considering that they actively helped AndreJ HD, it is a possibility.

Andre later confirmed he had many MAGA goons that go after those who were critical of him in the description of one of his videos. (Proof!)

After being exposed, instead of dropping it, AndreJ HD decided to come back a few months later with a rant video trying to "expose" the same Youtubers he harassed.

As it turns out, only his own fanboys believe him. The following videos are rant videos Andre made:

Overall, 4 main points can be taken from the videos:

AndreJ HD made a similar Spreadsheet document to expose the same people he harassed. You should notice that his archives are taking tweets out of context to strengthen his delusion that he is the victim of a harassment campaign.

A good example from the spreadsheet is this comment on column A, row 5

Then there's a link to this tweet thread which reads: It wouldnt be one I my tweets without a typo XD For those wondering, If I delete. I will still be on http://twitch.tv/rachaelmesser and http://youtube.com/rachaelmessergaming I also have the discord Much love to all you wonderful souls out here! Love you and maybe see you around in a few months :) ♡.

On the previous tweets before the "incriminating" tweet in question, Rachael comments on how Twitter is extremely toxic which is bad to her mental health. The tweet itself linked in Andre's spreadsheet simply says that if she deletes her Twitter account, she has other accounts on other websites. She makes no mention of hacking nor Andre on said tweet.

Besides the out of context archives, Andre took a few angry tweets actually directed at him and conflated them into harassment in an attempt to make a point. 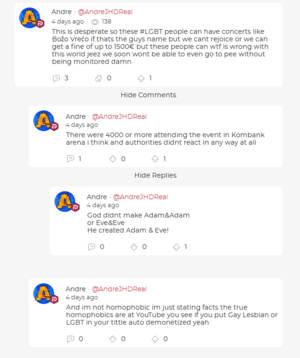 "Yes, I am not a homophobe, but like we should stop gays from meeting up and god didn't create Adam and Steve. Oh yeah also, did you know what YouTube did to the LGBT?"

AndreJ HD purchased subscribers. According to Twitter DMs, it is because his parents threatened to cut him off the internet entirely if his Youtube channel was not getting enough subscribers at a steady pace. This could mean AndreJ is acting in a terrible manner because his parents are very entitled. (Source of reference)

Considering he is an adult and he lives with his parents, that makes him a basement dweller.

AndreJ HD had an account on a Pakistani website called Playithub.com where he made a video against someone else as seen . Looking up his name on the website gives no result, but his name does autocomplete in the search bar.

Andre complains about people who did not watch his rant videos in their integrality when it is very difficult to understand him and they are so poorly edited.

corestormy (She has harassed big Youtubers too)