Atheism is Unstoppable (AIU), also known as TraceyRemix and Atheist Roo, is a generally despicable, unpleasant, extremely narcissistic, arrogant and shitty person, a militant atheist elitist and self-described anti-theist as well as an anti-SJW who spouts hateful, insulting, condescending, anti-theistic rhetoric towards people who believe in God, religious people, including Christians and Muslims, denouncing even other atheists for not being anti-theist and militant like him, as well as bullying and doxxing his critics for the sole reason of criticizing him. The main problem with Atheism-Is-Unstoppable is his horribly unlikeable condescending egotistical douchebag attitude, and that half of the derogatory critiques and responses to these said people are ad-hominem attacks out of ridicule and spite.

Although it is speculated he is a troll, it could simply be that he is a bully with an incredibly large ego and internet tough guy persona. However his fanbase does consist of atheist trolls.

What makes Devon not seem like a troll is how genuinely angry he gets when people respond to and criticize him, bordering more on narcissism than being a troll, although most trolls are narcissistic by nature. His avatar is a kangaroo, and nicknames himself Atheist Roo.

Atheism-is-Unstoppable's real name is Devon Tracey. He lives in Los Angeles, California, a caucasian male in his 40s, and is bald. 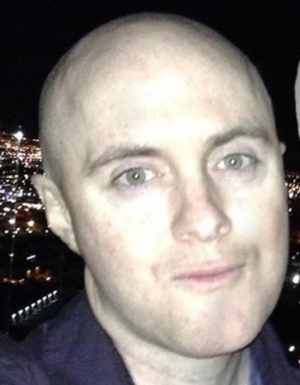 Him in real life, with his smug look and bald head.

Devon is a left wing centrist with a strong hatred against conservatives or anybody on the right. He voted for Hillary Clinton in the 2016 presidential election, and any fans who are conservative, right wing or voted for Donald Trump in 2016 election would be dismissed, ridiculed, bullied and spited by him, as well as blocked from his then active YouTube channel which has since been terminated. He also did the same thing with any viewer who were critics of Hillary Clinton. He is also an Anti-SJW.

It is obvious by the username that he has a strong seething hatred against religion and extremely hostile towards anybody who believes in God or religious, Christian or Muslim, hence the name Atheism-Is-Unstoppable. He is very militant, elitist and anti-theist in his atheistic point of view, and shames, insults, spites and ridicules anybody who is theistic or religious in any way, loves to shove his anti-theistic rhetoric down peoples throats. Much like anybody who was conservative, right leaning, or voted for Donald Trump in the 2016 election, he also ridiculed, spited, bullied and blocked religious or theistic people from his channel. He is often comparable to Brett Keane, who is a hardcore Christian.

He is also speculated to be extremely racist. He believes black people are the recessive criminal gene.

Is he a troll?[edit | edit source]

Whether he is a troll or not is irrelevant, because of his shitty, unpleasant, condescending and douchebag attitude. It is also further evident that he is an internet tough guy, because he uses this kangaroo avatar as wild kangaroos are generally violent and aggressive in real life, like how he thinks of himself. One of his slogans and catchphrases on his merch shirts says "fear the roo" to egotistically insinuate how he thinks he is tough, intimidating and badass. He has challenged people to IRL fights, not to mention his wannabe tough guy attitude which he gives off and prides himself on being are very evident examples of him being an internet tough guy. This tough guy act borders on the line of being an internet troll and internet tough guy, but it is entirely possible he is an internet troll/internet tough guy hybrid. He has an incredibly large ego to add the cherry on top because of his demand to silence his critics under his reign of fans and supposed friends. It is obvious that he is full of himself, arrogant, pretentious, self-absorbed, extremely narcissistic, and egocentric. 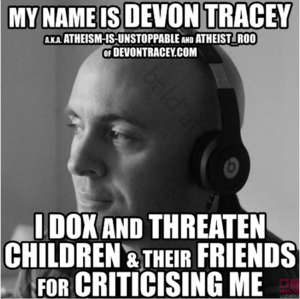 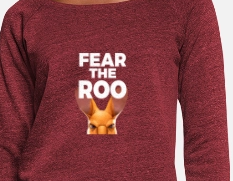 Nobody is buying your tough guy act pal 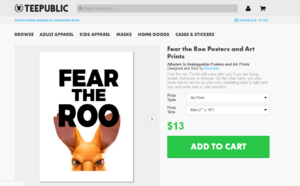 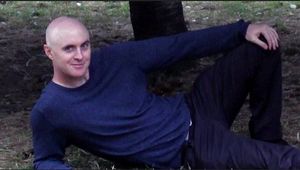 His camera pose. Tell me that is not the look of a smug prick who is full of himself.

It is entirely possible if not obvious that he has Anti-Social Personality Disorder, alongside Narcissistic Personality disorder, given how extremely narcissistic he is in his videos, as well as all social media platforms, and how unpleasant he acts towards everybody around him and certainly towards his critics. Not to mention his reckless behavior, disregarding the safety for others towards his demand to false flag his critics videos down to stroke his enlarged ego, and to dox them potentially putting their lives at risk. Using acts of blackmail, threats, coercion, intimidation, and bullying to prevent his critics from criticizing him. He also demands shower of praise from his fans at every given opportunity likening himself to a God like figure, banning anybody who disagrees with him. Accusing the people who he deems as startling, or demanding of slander, asking what their name is, even asking him a serious question can drive him into narcissistic rage and a fit of recklessness towards his fans, viewers and critics alike.

In January 2016, Devon bullied and doxxed one of his critics, a 14 year old boy for criticizing him, named Logical Liberal. A fan of AIU doxxed this person upon Devon's request. However this has not been the only time AIU has doxxed someone, which includes one of The Amazing Atheists friends, Creationist Cat. Devon will send doxxing campaigns against people in order to silence his critics. He extorts and blackmails these people in an attempt to silence them, which is a prime example of his narcissistic and potentially sociopathic behavior. His behavior is mentally unhinged, reckless and among the worst in the Anti-SJW atheist elitist community. Devon will resort to insulting people who dare criticize him for his attitude, to further hammer in his narcissism.

He also has a die-hard unhealthy obsession with Cenk Uyger of The Young Turks, as he did make multiple videos on him on YouTube, and still does to this day on his Bitchute. He likes to call it "curbstomping" in the words of his own professional internet tough guy persona.

His critics will not only have a lynch mob sent after them, but will be banned by AIU because of his enlarged ego. AIU also demands everyone including his fans to worship him like some God, and will ridicule and ban them if they are "disloyal" or not loyal enough to his vision, an obvious sign of narcissism and egotism. 2015 to 2016 was at his absolute worst, which is when he sent lynch mobs after his critics to silence them by mass flagging and dislike bombing, and when he also sent his fans to dox said critics. If you criticize Atheism is Unstoppable he will call you out, by using intimidation, coercion and bullying tactics, by coercing and threatening you to not criticize him in a blackmailing manner, sending a lynch mob after you or doxxing you.

He is a left wing centrist, voted for Hillary Clinton and spited anybody who voted for Donald Trump in the 2016 election, any fan of his who voted for Trump was automatically dismissed, ridicule, spited by him, and banned from his channel.

Responses to atheism-related videos would consist of him resorting to derogatory ad-hominems by insulting the people he is responding to relentlessly, spitefully, and condescendingly. He will even go as far as to denounce atheists who are not militant and anti-theist like him.

His doxxing got so bad that TJ Kirk of The Amazing Atheist denounced him for doxxing. He has also challenged people to in real life fights, to further prove how much of an internet tough guy he is. He is also an advocate for bullying and doxxing for the sake of spiting his critics. He also has told people to false flag peoples videos for him, including the person he doxxed, Creationist Cat. 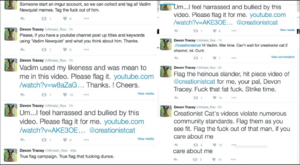 An obvious sign of his destructive narcissism and egotism. Just a scumbag in general. 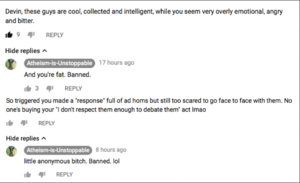 People he has doxxed:[edit | edit source]

Despite of his indefensible actions, his brain-dead delusional fans are no better if not worse than he is, they will blindly defend him like his little minions. They will mass dislike bomb any video criticizing their lord and savior, and spite the person critiquing him by using derogatory insults, mockery, or blatant disregard for the criticism.

Appearing in court at the OJ Simpson Case:[edit | edit source]