Brightclips or simply known as Bright is a Discord/Omegle troll and hacker well known for catfishing people on Discord servers and via Discord direct messages. He generally targets people with the disguised name of 'Jonathan Galindo' to hide their identity as well as many other people, he targets especially girls on Omegle. He has gained a following, as well as support from viewers of his. His avatar is an evil clown, wearing a gray hoodie, red hair, face paint and with computerized green text on his forehead. He also wears a mask likened to the avatar in real life, to hide his identity for anonymity, a common tactic for anonymous trolls to do.

He joined YouTube on January 3, 2019. All that is known is that he is an teenage male possibly in his late teens to 20s, and lives in Los Angeles, California.

He catfishes people on discord on a regular basis, posing as an attractive woman or underage girl.

He is generally malicious and predatory towards the people he targets.

He will send spoopy links which will leak people's IP address, potentially doxxing them. Not even supposed "predators" he accuses them of being.

He manipulates people into revealing their addresses and where they live, especially girls on Omegle.

He is hypocritical, he trolls people for being predatory, particularly unidentified users under the name 'Jonathan Galindo'. But is predatory towards girls on Omegle. 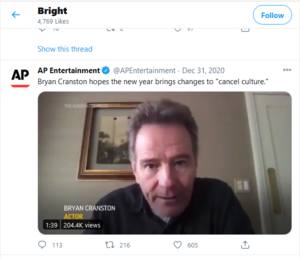 Him boasting about his road to 200k, already sounds suspiciously egotistical right off the bat. (Notice the smile emoticon)

His support for Keemstar[edit | edit source]

Unsurprisingly he supports Keemstar and for the scumbag he is. 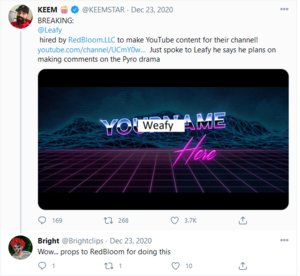 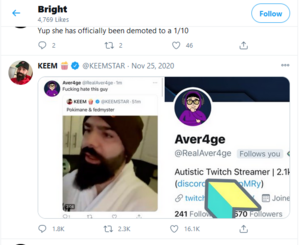 He has once made someone cry through psychological torment with his trolling, including him managing to gain the 'Jonathan Galindo's' IP address. 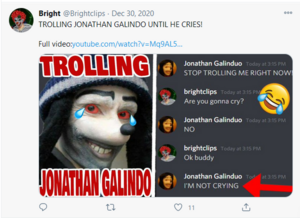