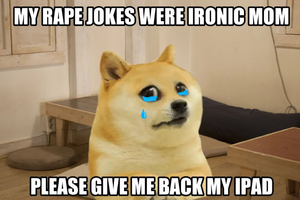 Edgelord trolls tend to swear as much as humanly possible, using crude language or slurs more often than the average American. Their vocabulary consists of shouting "faggot" to insult users they may disagree with, regardless of whether the person is straight or gay, or yelling "motherfucker" while playing video games. In some circumstances, they may come to tell you to commit suicide by saying "kill yourself", "hang yourself" or yell "death to jews!" at you if you happen to be one, it is not as common nowadays as it was the last half-decade, but it is still likely to happen, especially if you're a big figure. So basically, they love hurling slurs or telling people to commit suicide and being overall invective, generally out of anger, so do not take it personally if they insult you. Otherwise, edgelords may either laugh at or make jokes about atrocities like the holocaust, 9/11 terrorist attacks, the hinderburg disaster, mass shootings, genocide, slavery, plane crashes, suicides, incidents and deaths in general, all for the sake of being edgy, offensive and pissing others off. Obviously, that means edgelords tend to lack empathy and find comfort by seeing people die, in which case they can also be considered as being sociopathic.

Trolls like this are often the most insufferable and they rarely understand why certain jokes or slurs are offensive, but an easy way to get rid of them is to block them on social media since they won't be creating new accounts just to shout slurs on your profile, fortunately.

Dictionary.com https://www.dictionary.com/e/slang/shitlord/ "Shitlord is slang for an internet troll who posts shocking and often bigoted content for the purpose of provoking a reaction, especially from left-leaning social justice advocates. Some shitlords ironically embrace the term."

"The term can also refer to an expert in memes and meme culture, or it can function as a vulgar insult more generally."

Everyone on this list feels entitled to hurl slurs at everyone else out of anger or for no reason whatsoever or are heavily into dark humor. These trolls have a history of calling people "retards", "niggers", "faggots" or any other offensive slur and they generally tend to not feel any concern about those people if they feel uncomfortable or they may encourage self-harm and eventually suicide.

The following 43 pages are in this category, out of 43 total.