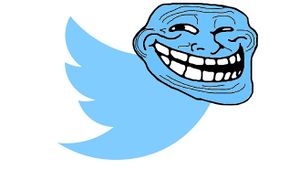 Twitter is a social networking site where people can make posts about anything they want for as long as they have an account that was not banned from using the service. Said posts are called "tweets". Users may share those posts by re-posting them to their own Twitter profile (This action is known as "retweeting").

Twitter is infamous for its sheer amount of trolls and a general toxic social atmosphere consisting of people insulting one another on the daily basis due to differing political opinions.

Twitter ever since the mid 2010s has become an infamous dumpster fire of trolling, arguments and flame wars.

Twitter has essentially turned into its own ideology, and its users have set up "laws" or "rules" that are unofficial:

Twitter is the epicenter of Cancel Culture, and are the people who "cancel" (which is essentially ostracizing) anybody for an out of line joke they made in the past, or someone simply expressing their opinion that was blown out of proportion, or accuse them of being "racist", an "incel", a "simp", "homophobe", "sexist", a "pedophile" or "misgendering". It is essentially a form of witch hunting and lynch mobbing.

A lot of the users and trolls are seemingly narcissistic on Twitter are also very virtue signaling about certain subjects so they are not shunned and ridiculed by the general population of Twitter, they may retweet about the said user who was virtue signaling about a popular subject so they can validated for their approval. A lot of these users are on the extreme left, and identify themselves as 'social justice warriors', a derogatory term used by Anti-SJW's which has been since considered outdated by today's standards.

Another tactic Twitter trolls or users like to do is "ratio" someone, which is when some tweet is considered "bad", and if the user in question so happens to express their opinion is cannibalized and is flooded with replies and dwindled with likes and retweets, because once again, the user is considered "bad" for tweeting something that is considered "offensive" or "bad" to the toxic social atmosphere of the Twitter population.

The most common tactic for Twitter trolls or users to use as a comeback especially when it comes to politics is the clown emoji, which has become a popular meme. It is generally used to dismiss any of the criticism that the opposing adversary provided, and to mock and ridicule them.

It is assumed that the toxic cesspit of Tumblr trolls and entitled elitist users that originated from Tumblr moved to Twitter because of the Tumblr NSFW purge that occurred in November 2018, but this is speculation and has likely originated from something else.

Twitter is generally a toxic cesspit of narcissistic elitist users and trolls on the far left, hardcore radical 'social justice warriors', and people on the far right who are very supportive of Donald Trump and his actions. Occasional alt-right users are on the site (but have mostly moved to Gab). Both extreme sides of the political spectrum are generally toxic, because both extreme sides ostracize each other for being right wing, left wing or being centrist.

Any troll can be featured here for as long as they are active on Twitter and have a strong presence on the website.

The following 43 pages are in this category, out of 43 total.