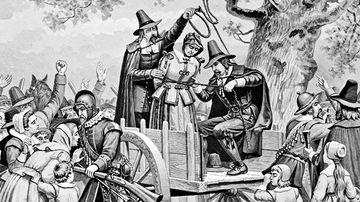 First depiction of witch hunting in the old age when witches were believed to be real.

The act of witch hunting comes back to several millennia ago and was often toward women who were believed to be witches.

In our modern society, it still exists. It is a well known tactic of targeted harassment toward internet users. Furthermore, this targeted harassment is often done by trolls who will falsely claim someone is a X (X being replaced by something that's seen as bad by the general population, examples being: Racist, Bigoted, Animal Abuser, Pervert, Pedophile, Troll, Nazi, Communist, Fascist, Child Abuser, Criminal, Misogynic, Cringy, Stupid, Imbecilic, etc).

Comparable on a lot of aspects, yet easily misused as smear merchant, the process of witch hunting is simple, but a tad bit different from just spreading lies about someone. All a troll needs to do to start a witch hunting is, either alone or with a group of friends, claim someone is X thing and then watch as the person's reputation is burning down.

Every troll that are known to give labels to internet users in order to start witch hunts will appear here.

The following 29 pages are in this category, out of 29 total.