Amanda "Corestormy/Corestompy" Jenkins, also known under many other aliases, is an online stalker who is infamous for harassing Youtubers by claiming that they are pedophiles.

She is a stalker who likes to defame people by calling them pedophiles repeatedly. She is infamous for harassing her victims across multiple sockpuppet accounts.

Furthermore, she targeted several websites that she thinks wronged her in the past and while she thinks that she has single-handedly took them down, in reality, she has only played a small part, if any, in these sites closing.

The troll's real name is Rebecca Pisani, she is a Schizophrenic white woman in her forties. She lives with her son in the United States, Pennsylvania. According to one blog post, she might have been born in Italy.

Her harassment campaigns span over a decade.

Firstly, she harassed users on the website YouKandy after being called out for cheating.

Secondly, she harassed the moderators on Rabb.it, after she repeatedly got banned from the website. One person called oCHRIS was a victim of her antics for a very long time, until Rabb.it shuts down.

Additionally, it appears that she is very good at social engineering since she managed to find the phone number of one of her victims.

One of her longest-standing victims is known as comet0707, she is an artist on Twitter who received hateful comments from Corestormy.

She harasses most of her victims by defaming them. She will repeatedly call them "pedophiles" and reply to absolutely everything they post.

TL;DR of the situation with oChris.

Nexpo was the first to make a video exposing Corestormy, it is available below:

According to the video itself, he originally attempted to ignore her, but eventually, he decides that the best course of action is to talk about her.

Before making that video, he made a tweet thread talking about the stalker in question which caused him to receive a lot more harassment from the troll.

Because of her relentless harassment, NightDocs called the cops on the troll in hope that she gets arrested.

Because of the troll, NightDocs removed his own Twitter profile, albeit temporarily. Looking up his profile results in text displaying This account doesn’t exist. The troll would later make the false claim that his account was banned, but banned accounts appear as Account suspended. 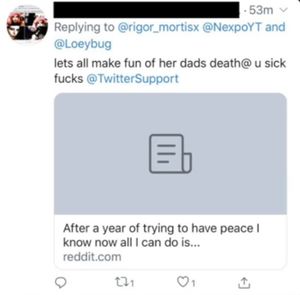 She uploaded two videos onto Youtube discussing her involvement with the troll. 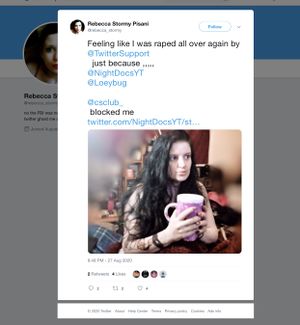 Rebecca does not understand what "rape" means.

This section lists all of her currently known sockpuppets. 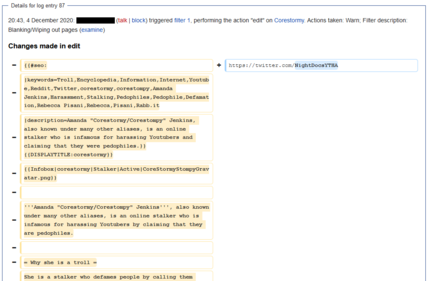 Corestormy performing an edit. Her IP address is blacked out.

On the 4th of December 2020, corestormy tried to blank this article, but to no avail since the abuse filter stopped her.

The IP was confirmed to be hers when an administrator verified her geolocation using her IP address, it went back to Pennsylvania.

Of notability, corestormy linked one of her suspended accounts in the revision.

She was active on several obscure websites, including Suicide Girls and YouKandy. As stated earlier, she was banned from YouKandy for harassment.

Based on her blog and other sources, she believes to get bullied herself when, as a matter of fact, she is always the perpetrator and never the victim.

Additionally, she will compulsively screenshot any and all negative comments about her in the hope to make herself appear to be the victim, this is very apparent on both her Twitter accounts and Facebook accounts.

She allegedly sent pornography to her son, and unrelated minors while stalking them too.

On another note, she is a massive hypocrite. She complains that she gets harassed when she does exactly the same thing, she claims that someone stalks her father when she does the same thing, she calls other Youtubers pedophiles when she could be a pedophile herself and last, but not least, she obsesses about her stalkers to the point where she makes a call to one of those so-called stalkers so they stop speaking up about her and allow her to freely harass them.

Another potential troll going by the username @csclub_ on Twitter owns a website called corestormy.club, it is a honeypot made for the sole purpose of doxxing her. [lol]