CreepShow Art is an artist from Youtube who uploads storytime videos, rant videos and commentary videos on either popular internet topics or her everyday life onto her Youtube channel.

Ever since June of 2021, she was cancelled and started losing subscribers due to a recent drama caused by her continued harassment of other content creators on the platform. Moreover, when she was exposed for using a troll imageboard, it turns out she was virulently LGBTQphobic, misogynist, ableist, and racist, all simultaneously. This led to her loss of over 100'000 subscribers when this information spread to Twitter and across several Youtube channels.

CreepShow Art is a vicious troll, stalker, gaslighter and smear merchant who, along with her then boyfriend Anthony Parker, harassed several smaller Youtubers for no apparent reason whatsoever. Additionally, she was once active on the troll imageboard lolcow.farm which is a splinter site from Kiwi Farms.

As an egotist, she projects herself onto others. You very often hear her criticize bigotry, but it was revealed that she purveys that exact same bigotry.

She is manipulative, falsely accused someone of wrongdoings and lying (How ironic) and made libelous claims against them.

She doxxed her sibling, Jem, who then allegedly blocked her on Twitter after she tried to contact them. 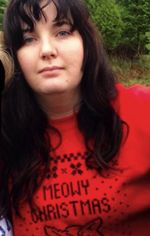 She was born in Nevada, United States, where she currently resides.

She was allegedly thrown onto the streets by her parents.

She lives with an abusive boyfriend whose name is Anthony Parker, however, they have yet to be legally married.

CreepShow Art is particularly resentful of other people, as such, she has shown to be more than willing to whine about them in rant videos where she would rudely and condescendingly talk about them.

Her personality is often described as "Catty" and "Bitchy" by other Youtubers, mainly Emily Artful in her exposé video.

Jem stated publicly that they attempted to distance themselves from CreepShow Art due to her unrelentless narcissism and pointed out that their parents did not treat them right. However, CreepShow Art claimed the opposite, that her sibling was spoiled because they were performing well at school and that Shannon was the one to distance herself from her sibling. Additionally, Shannon is not consistent in her writings by stating once that she loved her parents and then claiming it to be the polar opposite the next day.

Shannon allegedly bullied her sibling by calling them fat and a Nazi which in turn would cause their eating disorders and self-esteem issues.

In 2021, Jem would eventually burn the bridge entirely by allegedly blocking their sister after being doxxed on lolcow.farm following their hospitalization. They were put on intensive care and, because of that, telephone calls from internet strangers would have negative effects on their health. Prior to that happening, CreepShow Art claimed that she cut her sibling off her life previously, but only tried to contact them much later on.

CreepShow Art followed it up by making false claims that her sibling said that CreepShow Art was not sufficiently gay to be a part of the LGBTQ+ community among other defamatory remarks, however as it turns out, she was yet again projecting since Shannon claimed that Jem was straight when they were younger. 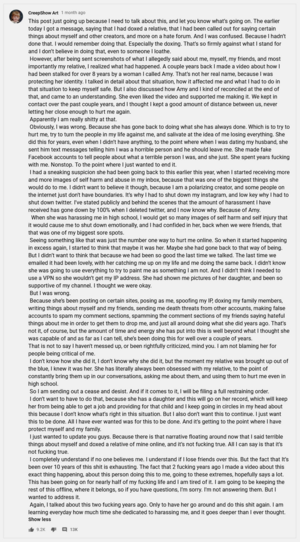 As stated earlier, she is manipulative, here we show more examples of how her manipulation works.

She makes use of strawman characters like "Jerry" and "Amy" in order to appeal to pity. "Jerry" was supposed to be a crazy stalker fan that she mentioned in her video titled "The WORST Fan Ever" and "Amy" was meant to represent Emily, the person whom she stalked throughout the years all the while projecting her behavior onto.

She created and used sockpuppets to pose as fans of Emily. They were meant to push Emily into attacking Shannon by contacting Emily and telling Emily what Shannon has done. For example, she privately accused herself of plagiarism to get Emily to rant on her, but instead of doing that, Emily simply contacted her real self, CreepShow Art, and asked politely about the odd similarities between her Youtube series and drawings to hers.

She likes to play the devil's advocate and pretend to either be a fan or a hater on lolcow.farm to twist the discussion there to her favor.

She is a noted hypocrite for doing the very same things she accuses other users of doing. In turns, this creates back-and-forth feuds where she harshly criticizes other Youtubers for perceived offenses and then they respond back, continuing the circle.

Anthony was also harassing Emily around that time because he holds a grudge against her due to the impression that she was cheating on him. 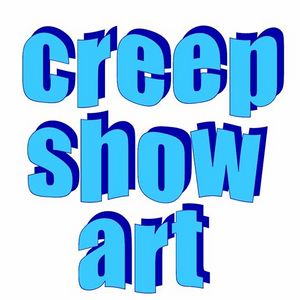 She created her Youtube channel in 2016 where she would start making rant videos on art-related topics. Her first Youtube video was assumed to be uploaded in 2018 since no other video exists before that point in time.

Her aforementioned husband was harassing Emily Artful on Twitter again by claiming that she was buying subscribers for her Youtube channel and making passive-aggressive threats.

She was criticized for going after Jameela over her perceived belief that Jameela was faking her disability. The video was extremely vitriolic to the point where some of her fans then criticized her for making the video in the first place.

She uploaded a video titled "I was STALKED for 8+ Years | Storytime" indirectly referencing Emily via her strawman character "Amy" who was given a name strangely similar to Emily.

CreepShow Art, aided by several Youtubers, including, but not limited to Prison Mate Luke, Omnia, Kai Weiss, Avrona and Camila Cuevas, spread rumors that Hopeless Peaches herself made defamatory comments about CreepShow Art and poisoned the well so that CreepShow Art gets ostracized from the art community she was in. Those allegations were thankfully debunked.

The mentally ill Onision started harassing her right after she made a video on him - This prompted her to make a second video showcasing the emails she received from him.

In March, Shannon doxxed her sibling who was being hospitalized at the time (Further elaborated farther up above).

CreepShow Art accused Kamen of being sexist for not swearing in front of her - This prompted MangaKamen to make a video on CreepShow Art. 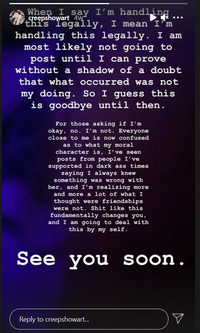 Sometimes around the third of June, an admin from lolcow.farm compiled all of CreepShow Art's posts and comments made on the website and then made a unique URL accessible for everyone to see. The link is here: https://lolcow.farm/creepshow.html

A little later on, she removed permanently many videos off her channel. The reason she did so is unknown, but it is possibly an attempt to damage control.

H3H3 would upload a video from his Podcast titled This YouTuber is Insane - Creepshow Art Drama to discuss the dispute between CreepShow Art and the many people she harassed.

Because of her newfound infamy, many people spoke up of their own experience with CreepShow Art and generally came to the same conclusion - that she is a Sociopath.

CreepShow Art likes to make rant videos on any topic she feels appropriate. She occasionally uploads storytime videos onto her Youtube channel.

CreepShow Art has a plethora of alternative accounts and socks that she uses across several sites, the full list of known accounts are listed below.

The accounts listed here are accounts she does claim to own publicly.

The accounts listed here are presumed to belong to her due to evidence put forth, however, she never claimed these to actually be hers.

The accounts listed here are believed to possibly be hers, but it is unknown whether that is the case or not.

She will apparently make a comeback as a podcaster. This news was first reported by Tipster on Youtube (Proof 1 / 2).

Her Twitter username was highjacked by one of her detractors. The user calls themselves "NOT SHANNON!" in all caps.

Her latest Youtube video was uploaded on the 6th of Jun 2021 and currently has over 48 thousand dislikes.

She publicly admitted herself that she was stalking Emily by name-dropping her and by going to the same places where she has gone to. The audio footage of this interaction is available here.

https://drive.google.com/drive/folders/15cFOMgcXQovVegDtxMkdcAqy2y6GxZEt (Archive of all her videos)