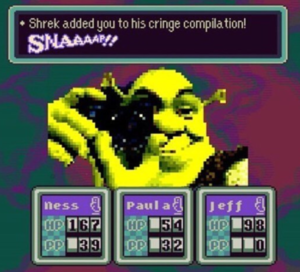 "Cringe culture" is a form of cultural mob that can turn into witch-hunts, similar in nature, although not quite like Cancel culture and Outrage culture, that consists of mocking someone's eccentricity, like the fact they are a Furry, the fact they are Transgender or the fact they like My Little Pony. More notably, mostly people who are the most likely to get harassed online for how they speak or how they look. Kids, very passionate people and Youtube "newbies"/DeviantArt "newbies" are very prone to this witch hunt as well due to people making cringe compilations out of their videos/drawings.

In modern days, baiting trolls (aka baiters) have used this culture as a means to get attention online since it works well. Some good examples are Super Minecraft Kid, 3LAMESTUDIO and Our Third Life among others.

Most of those trolls are often seen acting childish, immature, idiotic or eccentric, only for the sake of attention. In reality, they are not the way they portray themselves as, online.

Other trolls may use cringe culture as a means to harass or blackmail someone else instead. Fortunately, this type of troll is not very common, at least not as common as the baiters.

/!\This list does not include trolls who are using cringe culture as a means for attention, they're not victims of it./!\

Leopold Slikk, better known as Angry German Kid, was parodying gamers who get mental breakdowns frequently like Tyler1 and DarkSydePhil. That was all an online persona and the person behind that persona, whose real name is Norman Kochanowski, does not act like this in real life.

Contrary to popular beliefs, this very first case of "anti-cringe" witch hunt was caused by a German news outlet rather than one of those "EP1C MEMELORDS", known as Focus TV which did this to push the propaganda that "video games are bad for you" at a time when people were fear-mongering video games. This caused Norman to get harassed online and in real life to the point where he threatened to start a school shooting to scare the other kids at his school, only because people could not tell this was supposed to be satire and this lead to Norman becoming suicidal.

This is the first and best example that shows everything wrong with cringe culture.

Lhugueny is an animator and music parody channel that became infamous back in 2016 for striking down cringe compilations containing his own videos. Lhugueny had all the right in the world to take down those videos since they were bringing him a constant hate mob and they did not constitute as "criticism" unlike what the "ANTI-CRINGE MEMELORDZ" were claiming.

Ultimately, this affected Lhugueny far more than he would have expected since his own videos would get a ton of dislikes and hate comments, particularly after the controversy in which he put himself in by taking down said cringe compilations, there was basically no-win situation for him.

Another victim of cringe culture was Ricky Berwick. Due to his crippling illness, he appeared quite a few times in cringe compilations and fringe websites like Reddit, Funnyjunk, iFunny and 4chan to be made fun of. Fortunately, this exposure allowed him to grow an audience rapidly and he officially has over 2 million subscribers as of 2020.

SammyClassicSonicFan (Real name: Samuel Thomas) was yet another victim of cringe culture and that was caused by his uncontrollable outbursts of anger in his own rants on Youtube. He appeared a lot in both Sonic cringe compilations and Nintendo cringe compilations and, exactly like Leopold Slikk, he became suicidal when cringe culture started to affect him in real life. Samuel deleted his Youtube channel to mitigate the damages it caused to his reputation.

Samuel was eventually believed to be a troll, which is what many people still believe to this day. This had the irrevocable effect of making people not take him seriously, luckily, this only affects him online.

A Filthy Frank wannabe called Chairman Mar on Youtube was a victim of cringe culture. On the 9th of October 2017, he uploaded a video onto his channel that was titled "RICK AND MORTY MCDONALD'S SZECHUAN SAUCE FREAKOUT!!!!" in all caps. Later on, because the video was being re-uploaded everywhere, he added "(ORIGINAL VIDEO)" to the title of the video.

The video was viewed a few thousand times by people across the world, but not only that, the video was also used in Rick & Morty cringe compilations where people believed it was for real when, in fact, it was a skit. The video was then re-uploaded several times and going into the comment section of those re-uploads clearly show people mocking Chairman Mar because they believed he was serious. This trend would further extend to videos talking about the Rick & Morty fanbase where the clip would get used as comedy relief.

Due to all of that, he received a lot of hate online and this had a weak, but significant, impact on his life offline.

Etika, who committed suicide in June 2019, was suspected to have done so after being mocked online for his mental breakdowns which were used in a ton of memes and in one cringe compilation, still available to this day, on Youtube. While Etika was mocked online by the usual suspects, his suicide seems to have been caused because he lost friends and he had his online accounts banned several times.

Joji Miller, better known as Filthy Frank, is allegedly the person that made cringe culture popular back in 2014 by making parody videos and by making fun of weeaboos and feminists on a weekly-basis. He notably made fun of Transgender people, Furries and children as well which hints he was the basis for what Leafy's channel would become one day. Based on data in Google Trends, the moment Cringe Culture exists correlates exactly with the above information.

Leafyishere was the biggest perpetrator of cringe culture back when he was active, he would frequently make fun out of someone else in his videos just so his fans would harass that person while still branding his content as "satire" to avoid most criticism when in fact none of that was satirical, to the contrary actually. Leafy has his own page, feel free to learn more about him and his controversial past.

"Cringe compilation makers" like CyberRobotnix, Trigger Happy, Sir Cringe, CringePlanet, SJWCentral and ABLAZE just to name a few, were some of the biggest perpetrators of cringe culture back in 2016, alongside Leafyishere.

Most anti-SJWs reactionaries like Hunter Avallone, ComicArtists Pro (EthanVanSciver) and Mister Metokur are pretty much known as the modern perpetrators of cringe culture because of how they react to "cringeworthy" videos and pictures just for the sake of making fun of the people concerned by them, mostly SJWs/Transgender people for Hunter Avallone and EthanVanSciver and Furries/Bronies for Mister Metokur.

Websites like ED and Kiwi Farms still perpetuate cringe culture and this will likely remain the case for a very long time.

r/Cringe, r/Cringepics, r/CringeAnarchy, r/Cringetopia and anti/hate subs like r/YiffInHell and r/ClopInHell are to this day still the biggest perpetrators of cringe culture by making fun of anyone that shows up there. r/woooosh, r/copypasta and parody subreddits have a similar role when it comes to harassment and cyberbullying, although they're not directly affiliated with cringe culture. This also goes without saying that any community outside of Reddit like Encyclopedia Dramatica contributes to this problem.

Cringe Culture has started to decay the moment Leafy quit Youtube. As of 2019, you would rarely get cringe compilations recommended to you.