@dorkcop is a pretending leftist and a goon who tweets nonsense all day long and who occasionally harasses other Twitter users. He has got over 360 followers at the time of this article being edited.

Also noteworthy, is the fact this is a recently made Twitter account, meaning he could have been suspended in the past following a Twitter TOS violation, which would not be surprising on its own. -> His new account, @dorkcop, was banned from Twitter recently.

As stated on the header he harassed people and uses the same tactics every baiters use by being dumb and shit-talking random strangers on Twitter. Like any other narcissistic troll such as Blackbond, he has a very egocentric attitude, a holier-than-thou attitude and a know-it-all attitude. 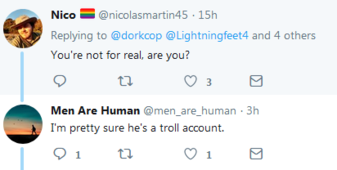 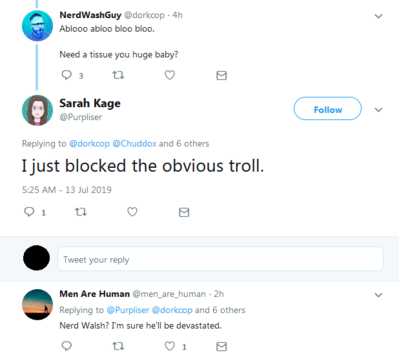 Funnily enough, he gets called a troll quite often. He would live better if he was more subtle with his shenanigans.

Dorkcop is a Caucasian male from the US, based on his bio. That's all the info that is available to the public currently. 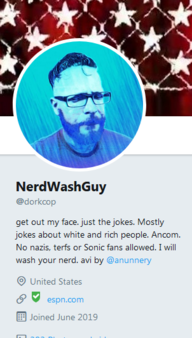 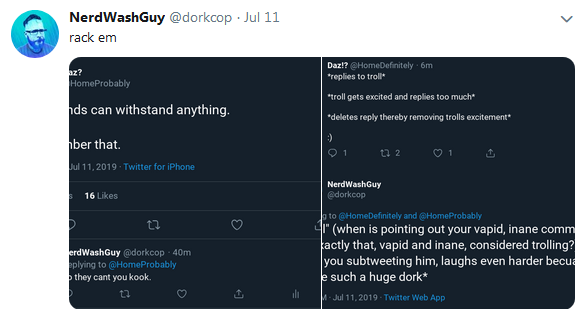 He is known to either shit-talk people or harass people and he does it quite frequently with his know-it-all and holier-than-thou attitudes, and he often brags about it by screenshotting the conversations he had with other Twitter users.

Take a closer look at both screenshots he posted. 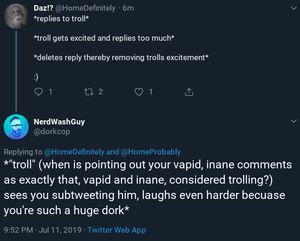 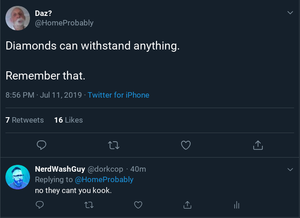 It is noteworthy to add that he always uses insults that are "tolerable" instead of downright offensive. Rather than calling someone a "dumbfuck", a "fuckwit" or worse like most trolls would do, instead, he calls other people "kook" and he uses "dork" in a pejorative manner which is a loophole to Twitter's rules and ultimately it allowed him for a very long time to never get banned for insulting other Twitter users.

Furthermore, he tries to make his tweets seem like they were all inoffensive, so that he never gets reprimanded by Twitter's admins. Whenever he posts a screenshot to get all his followers to witch hunt somebody, he makes sure to make it seem like a response to another tweet or a screenshot showing that he's been blocked rather than directly tell his followers to attack the person directly. Again, it is a loophole to Twitter's rules.

Additionally, not only can he be snarky, but he happens to have shit-talked many Twitter users for being centrist or MRAs and called them alt-right or Nazi-sympathizers while not understanding what either of the words means. In one case he even attempted to witch hunt one of said Twitter users.

According to his profile's bio (As of 04/09/2019), he supports ANTIFA which would explain why he calls anyone who is not a full blown Socialist a Nazi/Fascist/Enabler/Sympathizer. 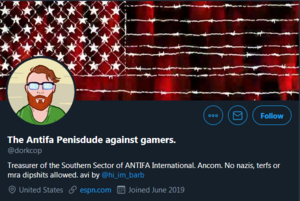 Additionally, to not help his case at all, he likes to make rape jokes, like Sargon Of Akkad.

As of recently, he went after Youtuber Sid Alpha, because he said something the troll did not like, further proving the fact the troll likes to harass people on Twitter. 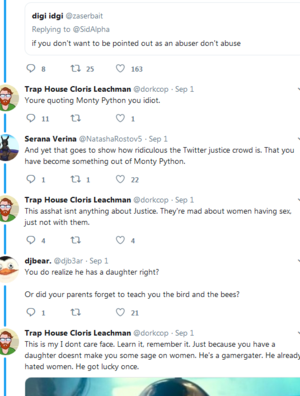 Here's a compilation of the stupidest tweets from the troll's account, including some tweets of him harassing someone else.

These accounts are not confirmed to be owned by the troll. However, they appear to be close with the troll meaning the accounts could be alt accounts of the troll.

transitionfiend: This guy loves laughing at you for blocking him, well if you ever care enough to block him. His bio is "If you block me, you will serve me forever in the afterlife. American Patriot. Followback. #Garbagetwitter". Which hints he hates getting blocked by the fear that he wouldn't be able to go around and harass people with his trolling shenanigans and would ultimately fall into irrelevancy like David Mabus.

beallyyoucanbop: He seems to know dorkcop fairly well and he interacts often with him. 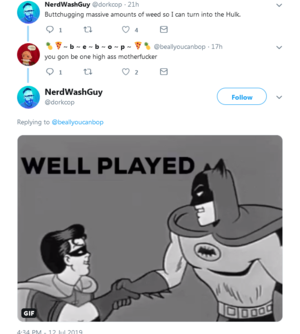 _sansculottes_: He liked every single tweet posted by dorkcop which hints he could be an alt made to promote the troll's tweets.

Although he is gonna harass anyone whenever he feels like it as a troll, he still appears to target Men's rights activists and right wingers in particular. It was clearly shown on the article he went after nobodies, but it is true that he has a preference when it comes to harassing people.

Funnily enough, he's the first troll thus far to not hate Furries nor Bronies, but rather he hates Sonic fans. That is rare among trolls, indeed.

He changes his Twitter handle very frequently. That being said, his Twitter username stays the same all through the year.