Frank Hassle is a notorious internet troll that 'hassles' people in public, particularly people who he confronts, hence the surname 'Hassle'. He had a YouTube channel, which was terminated in 2020. Additionally, he had another Twitter account that was called @new_engine, but it was suspended too.

When it existed, his YouTube channel had consisted of videos harassing and trolling people in public.

He has also stalked and harassed a well-known YouTuber by the name of Boogie2988.

He has purposely made false claims to piss people off via Twitter, especially Boogie2988 in particular. 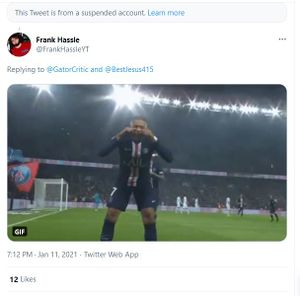 On twitter, any person who reacts to his actions negatively results in him replying by ridiculing and mocking them with crying gifs. 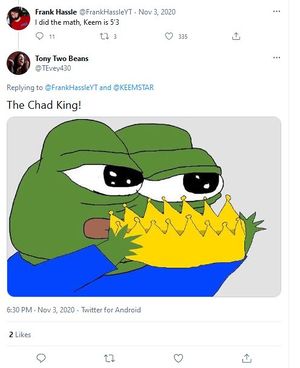 When fanboyism goes far off the rails.

Like pretty much any internet troll on the internet who is a sadist, he excuses his actions all under the pretense of "its funny" or "for the lulz".

He constantly calls himself the "Chad King", and his fans do so as well, making him an egotist.

He also called Boogie2988 a "fat pussy" for not shooting him on sight, just your run-of-the-mill typical shit-talking.

He suspiciously deleted his tweets throughout August 2020, speculatively to cover up his act and shit-talking.

His full name is Cameron Williams. He lives in the United States of America.

He is a right-winger and supporter of Donald Trump, he also associates himself with Ethan Ralph of The Ralph Retort. He occasionally retweets Paul Joseph Watson on Twitter.

On Twitter, Frank Hassle started threatening and harassing Boogie2988, by threats of showing up to his house, and acts of psychological torment, and violence. He targeted Boogie2988 through Twitter direct messages and exploited them by publicly tweeting them on his twitter. Boogie2988 seemed to have trust in Frank Hassle where Frank Hassle was maliciously stalking him and threatening him.

The excuse was I got terminated/Boogie2988 flagged down my channel where Frank Hassle falsely accused Boogie2988 of flagging down his channel, when this was not the case. 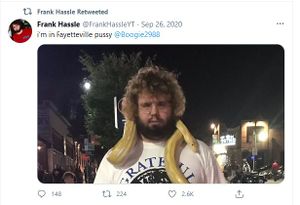 Many internet trolls on Twitter and YouTube accused Boogie2988 of shooting up a school, which was, in reality, a half-truth. This is based on the fact that Boogie2988 did shoot in a neighborhood and a nearby school as a warning shot, he did not injure anyone. It was also legally justifiable for Boogie2988 to fire a warning shot under the Arkansas protection law of a castle doctrine state.

In spite of this, these trolls still accuse Boogie2988 of breaking the law, and a warrant was issued for Boogie2988's arrest, and Boogie2988 was arrested on May 7, 2021, on charges of aggravated assault with a $5,000 bond by the Washington County, Arkansas sheriff's department.

Boogie2988 vs. Frank Hassle beef was at its peak in 2020, Keemstar also got himself involved in the feud and included the fights and arguments in his livestreams and videos. 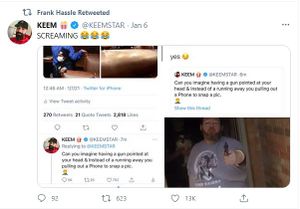 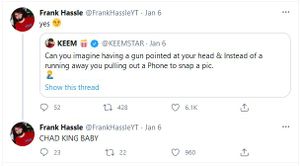 Initially, Keemstar was being neutral in the situation, laughing at the feud between Boogie2988 and Frank Hassle where Boogie2988 was pointing a gun at Frank and fired a warning shot.

He then became supportive of Frank Hassle later on.

It was obvious by this point that Frank Hassle was trolling Boogie2988 and he was taking the bait, being psychologically tormented, harassed, threatened and shit-talked to the point of being mentally unhinged, threatening to kill Frank and taking pleasure in doing it, which Frank Hassle found funny and laughed off. This is a recent example of why you should not feed the trolls. A delusional narcissistic internet troll who is provocative by nature and will only find amusement by the emotional reactions they desire. On top of this having a victim mentality and spreading defamatory lies about someone and then claiming you are the victim of the person you are harassing and targeting.

It is not obvious enough that Frank Hassle is a deranged sociopath who thinks driving someone with mental illnesses to mental breakdown is funny, finds pleasure from life-threatening behavior, and is indifferent to actually dying. It is more evident because of his reaction to Boogie2988 pointing a real gun at him, and just laughing it off like its all a big joke.

To further prove he is an unhinged sociopath, when Boogie2988 was arrested on May 7, 2021, Hassle signed a petition to give Boogie2988 the death penalty, to which no surprise his sociopathic troll fans agreed to do. 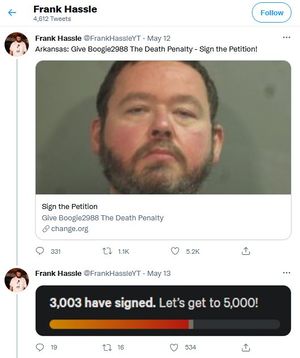 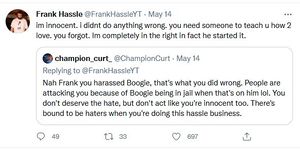 He also disingenuously claims that he hopes Boogie2988 gets the help he needs when it is clearly obvious that Hassle is an unhinged stalker who initiated it and planned to get him arrested. 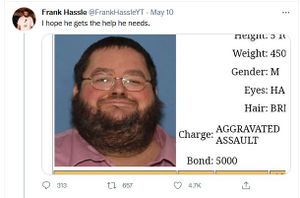 Frank Hassle posts the face of Boogie on Twitter.

It is apparent that fans of his are supportive of his actions and blindly support this kind of behavior.

This is what has become of the internet. In the early to mid 2010s, public pranks were notorious for being fake, and for their harassment of other people "its just a prank bro". But actually harassing someone in public is considered "funny" to the eyes of these blind fans.

In fact, most if not all of his fans are internet trolls themselves, a few have made "fan-art" of him. During the whole Boogie2988 and Frank Hassle feud, these fans cheered Frank on for his despicable stalking behavior, and legitimately think that a life-threatening situation is funny. Like the delusional sociopaths they are, they resorted to making fun of him, along with Frank Hassle himself by tweeting about it some sort of entertainment value.

To add salt on the infected wound, anybody who makes videos ranting on Frank Hassle will be mass disliked bombed, and flooded with nasty comments by his braindead fans. A lot of the fans will white-knight Frank Hassle, claiming that Frank was innocent and that Boogie2988 was the aggressor when he literally was threatening Boogie2988 by saying "it will be the worst day of your life", and to show up to his house. Not to mention all the other aforementioned things that has been said before.

Paul Joseph Watson praised him on Twitter, on top of this he tweeted about the Boogie2988 and Frank Hassle debate asking Keemstar when the debate would be live. 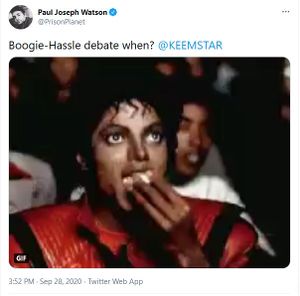 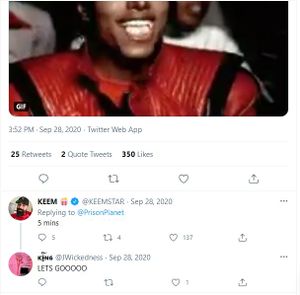 4chan - Behavior is not too dissimilar.