God Hates Fags or GHF for short is a website owned by the Westboro Baptist Church, which sole purpose is to create animosity against homosexual people and also serve as bait for the opposition that believes this website deserves to be shut down. The Westboro Baptist Church itself is notorious for being one of the most hate-filled and homophobic in America.

The website serves as a news outlet as well which produces updates of the Westboro Baptist Church.

The church itself was run by a Christian fundamentalist and likely a puritan named Fred Phelps who died in 2014.

Why this is a troll website[edit | edit source]

As said earlier, the website's unique purpose is to crave for attention by creating animosity with bigotry. 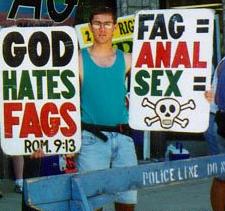 The owner of the website has a long past of controversies relating to insensitive statements such as We told you, right after it happened five years ago, that the deadly events of 9/11 were direct outpourings of divine retribution, the immediate visitation of God’s wrath and vengeance and punishment for America’s horrendous sodomite sins, that worse and more of it was on the way. We further told you that any politician, any political official, any preacher telling you differently as to the cause and interpretation of 9/11 is a dastardly lying false prophet, cowardly and mean, and headed for hell. And taking you with him! God is no longer with America, but is now America’s enemy. God himself is now America’s terrorist. and for carrying out protests alongside signs that read god hates fags written on them.

That aside, the website picked up heat over the years and was noticed on several occasions by different news outlets, organizations and forums, including the BBC and the SPLC.