An Incel (Involuntarily Celibate) is a person who consider themselves unable to attract a romantic or sexual partner, they are usually misogynistic and hostile towards women and men who are sexually active. They are usually narcissistic, delusional, entitled, and unable to understand why they cannot seek a relationship with a woman. They often have fantasies or plans of mass shootings, and they are usually likened to Elliot Rodger.

Most incels are males in their late teens to 20s, and heterosexual.

Incels are also a part of an internet community consisting of young men.

In the general consensus: It is a young man who can't get laid by a woman no matter how hard they try because they are either ugly, unlikable or boring.

There is an overlap between the incel community and the trolling culture since lone basement dwellers and trolls can be incels too and it is not super uncommon to have a troll, who is unwilling to get a job, be incapable to get a girlfriend either.

Incels may also be victims of trolls since trolls like to poke fun at virgins and shame them publicly. Some trolls may also like to harass them for self-satisfaction.

This list includes trolls who are also a part of the incel community.

Trolls who pretend to be incels[edit | edit source] 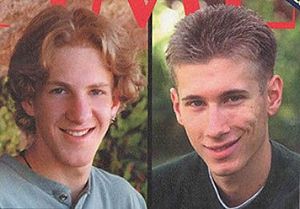 This list only includes incels that are notorious, either because they committed atrocities or for different reasons. That being said, they are not to be taken as a generalization.

Elliot Rodger
A narcissistic and autistic teenager who decided to go on a stabbing rampage against girls who were not interested to go with him. After killing the girls, he started a mass shooting from his car where he killed pedestrians and cops. Prior to the mass killings, he made a Youtube video on his, now deleted, channel. He was widely reported on the news following his suicide. Death toll: 6 Injury toll: 13
Eric Harris and Dylan Klebold
A pair of edgy teenagers who were bullied at school. They were behind the Columbine mass shooting and attempted bombing. The pair entered the school building "disguised as students", then planted bombs inside the cafeteria. Afterward, the pair went back inside the building to hunt down students where Rachel Scott was the first to be murdered. They were widely reported on the news following their suicides. Let's see the positive side of things, this event encouraged people to speak up against bullying at school. Death toll: 13 Injury toll: 24
George Sodini1
He was a computer analyst who received bad dating advice. After hooking up with many different girls (To the point where he legitimately managed to have kids), he was tired of being dumped by them and decided to kill them at a gym. Death Toll: 3 Injury toll: 9
Seung-Hui Cho
He was a mentally deranged student at Virginia tech college. After being rejected by a hooker and receiving a restraining order, he went on a killing spree against the school and killed a lot of students and teachers. The most interesting part of this issue was the fact that he perceived one of his teachers as being a bully simply because the teacher asked him to take off his sunglasses making him a very petty incel. Surprisingly enough, he managed to kill more people than the Columbine school shooters. It was likely because he was inspired by them and took notes on the mistakes to not repeat to prevent the potential failure of his future mass shooting. Death Toll: 32 Injury toll: 17
Dimitrious Pagourtzis
An autistic teenager, and likely a Psychopath, who was bullied at school and was described as creepy by other students and parents (Basically, a stereotypical "that one quiet kid at school"). One student, Shana Fisher, predicted his mass killings before it happens, but unfortunately, her parents did nothing to protect her and the other students because they did not actually expect this incident to happen. Additionally, Shana Fisher received sexual advances from the boy who asked her repeatedly to be her boyfriend which is likely why she became a target in this incident. Death toll: 10 Injury toll: 13
Randy Robert Stair
A Trans woman who killed her co-workers for seemingly no reason. She fetishizes death and loves Danny Phantom. Furthermore, since Randy was Transgender, Conservative and Transphobic news outlets and blogs claimed that she turned the way she did because "she was Transgender and the Trans community was generally mentally ill". Death toll: 3 Injury toll: 0
Tomohiro Kato
An angry Japanese Otaku who attacked a shopping center with a truck, then a knife and killed many citizen. Death toll: 7 Injury toll: 10 (14?)2
Frank Vitkovic
An Australian mass shooter who committed suicide by jumping off the last floor of the building he was targeting. He had an illegal weapon on him. Death toll: 8 Injury toll: 5
Alek Minassian
An autistic Redditor and 4channer who was the victim of bullying at school. He was given nicknames by the other students at his school such as "Chewbacca". Alek used a van to drive over the pedestrians and kill them. Death toll: 10 Injury toll: 16
William Atchison*
A raging white supremacist who was infamously stopped from killing everyone by a sofa. Death toll: 2 Injury toll: 0
Marc Lépine
A very old Canadian incel who tried to kill women in Montreal in 1989, in the name of anti-feminism. He planned out a mass shooting at a school and he made sure most men left the building beforehand. Death toll: 14 Injury toll: 14
Christine Weston Chandler
She is the most notorious autistic person on the net and her eccentricity is often used for mockery material (She is well known as a "lolcow" over Kiwi Farms). She is often the target of online trolls who will make fun of her and her infamous webcomic titled "Sonichu". Death toll: 03 Injury toll: ??3
Chris Harper-Mercer
He went to Umpqua Community College to murder people before turning his own weapon against himself and kill himself. Death toll: 9 Injury toll: 8
Scott Paul Beierle*
He is quite notable because he always hated women and would sometimes sexually harass them. It was so bad that it came to a point where he would get fired from different workplaces due to his behavior. One day he brought a gun into a Yoga studio to kill the people in there. Interestingly, he was racist, misogynistic, homophobic and would frequently post rhetoric online. Death toll: 2 Injury toll: 4
Armando Hernandez Jr.
An envious incel who targeted couples in a supermarket while livestreaming himself on Snapchat. Death toll: 0 Injury toll: 3

If there's an asterisk * right next to someone's name, that means they also had a past of online trolling.

1: Per technicality, he was not an incel since he managed to get at least one date, therefore, that makes him a nice guy and he would likely get labeled a simp if he was still alive.

2: According to Wikipedia, 12 people were assaulted with a knife while 2 more were injured by the drive-over of the perpretator. Those numbers don't add up to 10, they adds up to 14. Despite this inconsistency, only 10 people were injured apparently, as Wikipedia says.

3: Chris Chan never planned out a mass killing or the likes, unlike the other incels on this list, that is why nobody has ever died, however, because she is a troublemaker, she did hurt people in the past, accidentally or not, and likely numbers in the double digits. As stated earlier, she is only notorious because everyone makes fun of her.

What does this teach us?[edit | edit source]

Incels have once targeted the forum called "Wrong Planet". One member of the forum addressed the situation on a post, available here: https://wrongplanet.net/forums/viewtopic.php?t=371974. The reason why they targeted the forum is currently unknown.

The Joker from his latest movie became a symbol of the incel community and the GAMERS to the point where they teamed up to harass Veronica Rae for allegedly appropriating their "culture". (Source 1) (Source 2)

Volcel is a person who is voluntarily celibate, kind of the opposite of an incel. They are generally far more sane than incels because they rarely suffer from narcissism.

Incels rarely have friends, in addition to the lack of a girlfriend, because of their personality and look which only increases the chances that they go on a killing spree. Moreover, autism and ugliness are linked to bullying worldwide which is a common denominator to mass shootings at school.

Due to the fact many of them have autism, incels may say something degrading and/or offensive by accident which may explain why they cannot get a girlfriend and why they get easily perceived as racists and sexists on the net.

In terms of gender-ratio, incels tend to be male. Due to that fact, there is an overlap between the incel community and men's rights activists + MGTOW movements.

In terms of sexual orientation, most incels are straight.

According to the ADL, incels have committed a total of 50 murders in the US in the span of 6 months. One attack made by an incel was considered an act of terrorism by the US government.

If you want to learn more about incels, visit Incels.wiki or visit Wikipedia.

ED has pure numbers on the death tolls with no annoying wall of text, you might want to start there: https://web.archive.org/web/20200104053802/https://encyclopediadramatica.rs/High_Score

Autism and ugliness linked to bullying at school: