Jovan Hill was a Twitter and Instagram troll claiming to have a bipolar disorder, he is famous for creating two separate memes made solely to mock and defame Shane Dawson, Emma Chamberlain and James Charles under several different smear campaigns.

Twice in the same month, he went on harassment campaigns against Twitter users Shane Dawson by claiming that he is a zoophile and that he had a sexual relationship with his own cat and James Charles by fabricating a screenshot of him calling Jovan a "Nigger" on instagram. Additionally, he claims that both of them, plus Emma Chamberlain, are racist and if you support them you are racist and you deserve nothing more than harassment!

Like Leafy and many other trolls, he excuses his shitty behavior by saying "bro, it's just a meme/joke".

He is a male African American who obviously goes by the name of Jovan Hill and he's currently living in the US with his family.

He is known to make fun of Caucasian people and while nobody cares about that aspect of his, it's the thing he used to do a lot when his Twitter account was still available. Other than that, he sometimes begged his followers to donate to him on several different platforms, particularly Paypal which makes him an e-beggar.

He did not have any filter on his tweets which would make him regularly say very strong shit that even the likes of Keemstar condemned.

Additionally, both campaigns are covered under the "it's just a joke bro" excuse which ended up hurting one of the two victims when they overreacted over Jovan's defamatory tweet. 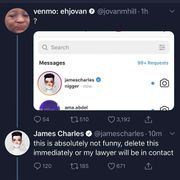 It all started when Jovan himself posted a screenshot from his Instagram private messages showing James calling him a "nigger", James responded by saying that faking a screenshot is not funny (and rightfully so, since people are too stupid to tell the difference between something that is real and something that is fake and it can actually ruin someone's life) and threatened to sue Jovan for defamation (See picture provided).

Not only it did not work as James planned since the troll was not sued nor reprimanded in any shape or form for the defamation and the only thing the whole drama did is to get the troll temporarily suspended from Twitter. Ultimately, it helped Jovan get more money by begging for more of it and since Jovan was popular and relevant at the time, he did get a lot of money off this drama.

The drama cooled down after a month, but during this time it was not uncommon to see people say things like "James Charles kissed you, like to undo" on Youtube.

It sparked off the same way as the James Charles saga, Jovan simply posted a screenshot to show Shane Dawson had sexual relations with his own cat and later eventually posted a tweet saying that Shane Dawson found pedophilia to be funny.

Past that point, Jovan had pretty much left the drama and focused on begging for more money. For months, Shane Dawson was being harassed over this "meme".

The thing here is, Shane Dawson was generally extremely edgy and most of the things he says are not serious. He admitted to have said this and that about his cat just for the sake of being edgy and Jovan simply took that out of context.