"Killah_Instinct" (KI) claims to be a Nazi of a "major corporation" and international jet setter. He is a moderator for Valve's Steam forums. He is also a prolific troll on those same forums.

Why Is He A Troll?[edit | edit source]

KI engages in common troll behaviors. By far his favorite thing to do is bait people into breaking the rules. He then abuses his power as a moderator to issue bans. Most commonly, to those that disagree with him.

KI's worst behavior is that he protects his friends from moderator penalties. He has a number of friends that assist him in trolling. Any time they are banned, he un-bans them. 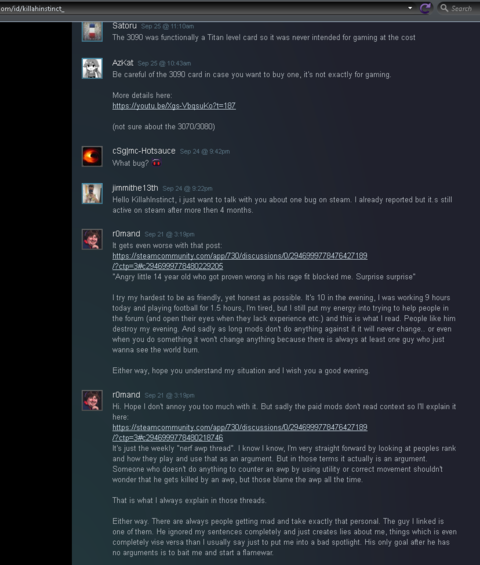 Within 2 hours of making the post shown in the picture, the user was un-banned. Further, several people that disagreed with the user were given warnings or forum bans.[1]

KI frequently lies about forum rules.[2] He does so with the specific intent of confusing people. This is so he can trip them up, and ban them.

He regularly breaks forum rules. Calling people names that come to him for help. Typically referring to Steam customers as "morons" and "idiots".

Sometimes KI can't find an excuse to shut down a thread he doesn't like. In these cases, he has his friends troll the thread. (Whom feel free to do so. Knowing KI won't punish them.) He then closes the thread. Saying it was derailed. Yet takes no action against the trolls that caused the problem.

KI makes outlandish claims. Claims which, he has no interest in proving. He claims to be "a CTO of a major corporation". However, he won't say which company. He claims that he's constantly flying around the world as part of his job. Has yet to provide any evidence this is true. Says that he's responsible for creating Valve's translation program.[3]

KI just can't seem to make a point without engaging in logical fallacies.[4] Not a problem when you can just ban anyone that disagrees with you.

KI is obsessed with controlling online narratives regarding cheating. Namely, he claims that people complaining about cheating, are usually lying.[5]

He locks all threads regarding cheating complaints. He will not allow the discussions to take place. Despite the fact they do not violate the rules in any way.

Back in 2014, there were increasing complaints about KI's moderation.[6] As a result, KI stepped down from his moderator position. It is not known if this was forced by Valve. However, KI claims it was his own choice.

Around late 2017 or early 2018, he was invited to become a moderator again. There have been non-stop complaints about him ever since. He dismisses all of it as trolling. Claims he has never done anything wrong and never made a mistake.

Much worse than KI, is the behavior he enables. He ignores any and all rule violations of the following people. Even if their infractions are brought to his direct attention. As a result, the Steam forums are far more toxic than then need be.