Lily Orchard is infamously known as a stubborn and narcissistic Transgender woman who has gained popularity on Youtube thanks to her bombastic personality. She is extremely aggressive, petulant, unlikeable and she harasses other people on and off the website whenever she can, and most often than not over a petty disagreement.

It is noteworthy to add her influence on Youtube makes her very dangerous. She can start a witch hunt against you if she wants to.

She is notoriously known to make extremely opinionated and rudely pessimistic rants and reviews all the while claiming those opinions are facts, in a very similar fashion to other trolls like Blackbond and Gligar13vids. Typically, those rants/reviews do not receive positive attention and Lily end up having to disable the like and dislike buttons most of the time.

The most notable rant she made was her Steven Universe rant which is insanely inaccurate, vitriolic and exaggerated. In fact, it is so bad she got called out by absolutely everyone over it.

She has shown time and time again that she will use her online popularity to start hate mobs and witch hunts against anyone she personally despises. More notably, she harassed people that could not defend themselves like Mr Enter and joshscorcher, and she went after some bigger targets too. All of those whom have been harassed by Lily Orchard are mentioned further down below.

That makes her a pretty condescending individual and an extremely harmful troll with questionable opinions which she tries to pass off as facts.

Since she is Transgender, she changed her name, but she later renamed herself to Lily Orchard. She allegedly has a sister who she claims to have assaulted to the point she ran away from home, however, this cannot be confirmed as a fact because she has a history of dishonesty.

As stated earlier, she makes a lot of rants. In general, her reviews/rants get a lot of negative attention and that's probably why she disables the ratings on all the review videos she has ever made. Some of them are listed here with some rebuttals as well.

On the 24th of September 2018, Lily uploaded a video titled Steven Universe is Garbage and Here's Why which is one of many rant and review videos she made over the years during her lifetime on Youtube.

In this video, Lily Orchard accuses the show of poor writing, unprofessional staffing, sympathetic views of fascism, and much more. Most notably, Lily has many segments in her video discussing the main show-runner Rebecca Sugar. Contrary to popular belief, Lily did not call Sugar a Nazi or a Fascist. Instead, she criticized the fact that Sugar hyper-focused on themes of forgiveness, while also trying to make a story about war. As a result, the main character Steven forgives the series main villains, known as the Great Diamond Authority. Said villains have shattered (the species equivalent of murder/death) millions of their own kind, and attempted to commit a genocide but instead turned their opponents into monsters.

Lily Orchard also believes that criticizing the unfortunate and gross implications of characters in a cartoon is a priority to have and eventually shit-talked robobuddies on Tumblr for actually criticizing the show for what it actually does wrong such as poor writing, animation and sound design. A link to the post is available below:

In that "review", Lily said she did not want to watch the show. It might be on the basis that she hates watching anything that is not My Little Pony.

The show already received quite a lot of negative attention, and was mostly singled out as "SJW garbage". Lily seems to be willing to further reinforce that idea with that review since she does not want to give that show a try and simply calls it "trash" right away. 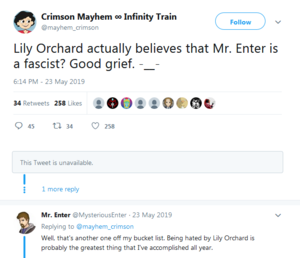 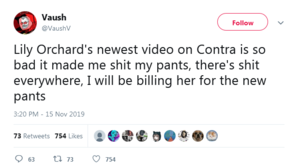 Lily Orchard is a vindictive and aggressive troll that harasses or otherwise shit-talks anyone she doesn't like and her popularity allows her to witch hunt anyone she wants, as well. She mostly goes after people smaller than her, but she may bully someone bigger than her own self too.

This list includes all the people that she harassed, shit-talked or had a feud with.

Additionally, it is alleged that she was always abusive against all of her own friends and it is rumored she blackmailed a Conservative for being, obviously, a right-winger. Take that information with a grain of salt.

This is not helped by the fact she wished death upon anyone who does not politically align with her and labels these same people "Fascists" or "Nazis".

This just comes to show the general nature of Lily and how much bile she spewed throughout the years.

Lily Orchard is hated in the autism community and is likely ableist, according to a Tumblr post: https://scarlet-titan.tumblr.com/post/187978002950/there-is-a-post-going-around-from-lily / http://archive.is/2S54P

Someone else thinks she is ignorant on the intricaties of autism and calls her behavior "ableist": https://criticalalexandrite.tumblr.com/post/176604481958/why-im-anti-lily-orchard-for-now / https://archive.md/Kleyg

Aside from her Youtube account, she posts on several social media platforms where she expresses her thoughts and opinions. However, broadly speaking, she is not any more popular on any other platform other than Youtube due to her behavior.

Lily Orchard is very active on Tumblr where she either regularly rants or answer anonymous comments and questions.

She made a series of posts over the many years she was on Tumblr, those posts show that Lily Orchard is extremely selfish either due to her ignorance or because she believes she can do no wrong due to her extreme narcissism. 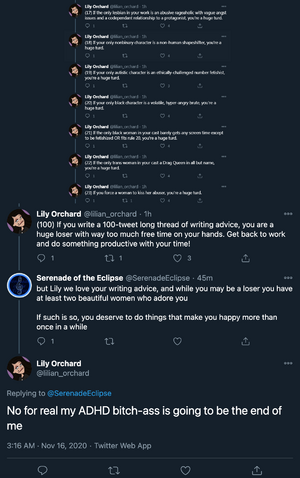 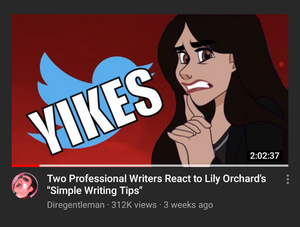 Her Twitter is not any different from her Tumblr account. She regularly spouts angry rants and most of her aforementioned feuds, harassment and shit-talking happen there.

She recently wrote a very unpopular top 100 writing tips which basically reads pretty much like this:

And she ended it with an attempt at self-mockery by making an ironic tweet that comes off as obtuse due to the subject matter.

What's worse is that in hindsight it is not even a bad thread, but it is so condescending that the message does not get through, and the topic at hand is completely ignored as this provides absolutely no tip to actually become better at writing.

She was accused of supporting Pedophilia and Beastiality because of fanfictions she made.

For instance, she created a Pedophilic My Little Pony fanfiction called Stockholm, it involves ponies developing a teenage/young girls fetish (Basically, Ephebophilia). This singular fanfiction, in particular, made her a pariah in the My Little Pony community. Ironically, she once lashed out on the MLP fandom for allegedly being "full of Pedophiles". The rant is available on this link. It is likely a seething response because most Bronies don't like her. To make the matters worse, the fanfiction has rape in it too.

Furthermore, she made a Pokemon fanfiction called Animal magnetism involving beastiality where some trainers have sexual intercourses with their own Pokemon(s). Ironically enough, the moral of the story is that if a human has sex with a Pokemon, the latter will not be able to lay an egg since interspecies relationships do not work well, however, following that moral, the trainers still kept having sexual intercourse with their Pokemon(s) as if nothing was said. Besides that, there is another Pokemon comic called Poke-Madhouse which tackles other issues such as eugenics, veganism and abuse.

Lily supposedly had a girlfriend who was into Pedophilia, Tara Callie more precisely. It has to be noted that Tara Callie is actually one of Lily's sockpuppets. It was accused of being a Pedophile and since it was a sockpuppet it left Lily in a really bad spot. Lily had yet another "friend" who was into pedophilia.

Furthermore, she once borrowed a computer from someone she hated and filled it with child pornography to frame the computer's owner of being a Pedophile, but that failed and she got exposed for it. The website where she found said child pornography is unknown.

She has quite a few alt accounts, all of them are listed down below.

These alt accounts are accounts that Lily Orchard does claim to own.

Aside from her Youtube channel and Tumblr blog, she only ever had two public Twitter accounts, one was called @lilianvorchard, the second one was @ValkyrStudios. Their purposes are unknown, besides the fact her accounts were personal accounts.

It is highly possible she uses all these accounts to evade blocks and Twitter bans since her main account, @lilianvorchard, was terminated by a user called Zia Giovanni.

Bhaalspawn: Her original username according to numerous sources on the net. It was used back when she would interact with Bronies.

Accounts in this section are accounts that she does not claim to own, but are speculated to be hers.

@TheAusomeAutie: It is currently unknown what it is used for, but a sneak peek into the account reveals that it retweets a lot and complains a lot about its own life. The account was busted as one of Lily's due to the way it talks, it is similar if not identical to how Lily talks.

"Tara Callie": It was supposedly her girlfriend. She never existed and was a sockpuppet. It is alleged that Lily's father was behind the sockpuppet, not Lily herself.

"Her sister": There was a Twitter account claiming to be Lily's Transgender sister, but it does not seem to exist anymore.

Background Pony #9F39: This was an alt account on Derpibooru made for the purpose of causing animosity against anti-SJWs with a fake screenshot that did not work and quickly turned sour for the poster.

Alchorative: It was an account Lily made for TV Tropes, she wrote an article for her own webcomic.

There is currently no one suspected to be an alt account of Lily Orchard.

Her most notable Youtube series is called Glass of Water which is a series of discussions/rants on certain topics.

Lily Orchard has many fetishes, including a rape fetish and a dominance fetish.

She took a break from the internet in 2020 and locked out her social media accounts.

https://callme-sarevok-anchev.tumblr.com/post/175880858709/the-lily-orchard-fan-pack-the-lily-peet-dossier (Note this is just a blog, but not only that, it is rather opinionated, take the information as you will)

The brother of Lily Orchard speaking out against her.