MaximilianMus is a gaming YouTuber who formerly played popular games such as Overwatch and Fortnite in which he enjoys partaking in bothering his teammates in the games he plays. Other than that, he is best known for trolling most content creators by brigading Youtube comment sections and raiding Twitch streams with his personal army.

He has currently over 1 million subscribers on his Youtube channel, but as of the 5th of April 2021, he nuked his entire Youtube channel by making his videos private due to community guideline strikes.

He is a griefer that loves to borderline embarrass his teammates by continually talking smack about them, it caused him to get banned several times from both Fortnite and Overwatch. Other times, he directly got his teammates killed purposely on multiple occasions during games in order to annoy them. Nothing more, nothing less.

Additionally, as of 2018, he decided to brigade comment sections on Youtube as a whole to annoy people.

He used to frequently commit cyber harassment, JT exposed MaximilianMus in his video for harassing other Youtubers such as the "D4NK MEMEL0RD" Weest, Cr1tikal, Berd and GabySpartz. Up until 2021, he relentlessly harassed other Youtubers and Twitch streamers just for the sake of it.

MaximilianMus has continued his trolling shenanigans and has harassed more people over Discord like Turkey Tom and JMAATV (See down below). 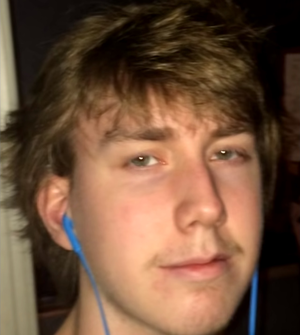 He is living in Sweden according to his Youtube bio.

His occupation consists of being toxic online.

Besides him being insufferable in online games, he has notably posted a video earlier in 2018 where he asked every single one of his viewers to change their profile picture to the same profile picture he bears, the one of J.C. Denton from Deus Ex. Viewable here.

Most of his fans are really devoted and to show their admiration, they actually used his profile picture as he intended in a similar fashion to Leafyishere's fanboys when they invaded Youtube with Leafy's favorite word, "Hisss", in 2016.

Lastly, it has to be noted in 2019 he made another video encouraging his fans to invade other websites. However, he deleted said video shortly afterward for an unknown reason. Basically, the world-wide-web brigade never happened.

To this day, people with Max's profile picture are still really frequent on Youtube which shows Max fans' dedication to be obnoxious all the while idolizing him.

MaximilianMus is contemptible on the net for his harassment campaigns over the span of 2 years where he would, among everything else, create harassment-focused Discord servers, spam Youtubers and Twitch streamers, and attempt several times to get them banned.

Weest was presumably the first victim of Max's online series of harassment campaigns. Notably, Max told his followers to send hateful messages to Weest's girlfriend following her father's death. He and his girlfriend received a lot of heat from Max's fanboys "just for the heck of it".

On the 11th of September 2019, it was reported by Weest that Max was telling his audience to harass Twitch streamers on behalf of himself in order to get Weest banned from the platform. See the tweet thread made by Weest.

Not only that, he precisely asked his audience to call said Twitch streamers racist and homophobic slurs just as a means to get them banned off the platform. To add salt to the injury, the idea was to shift the blame to Weest for the raids when he did not incite them at all. To place the cherry on top of the pie, Max doubled down by claiming this was ironic trolling and nothing very serious when considering that both harassment and defamation are serious and can lead to jail time.

On a Discord call, where both Weest and Max had a conversation together, Max started to mock Weest who had to cut the call short. The reason for the call at all is unknown, however, it is highly plausible the call was made for Weest and Max to mediate and reconcile with each other.

On the 28th of October, the Twitch streamer known as WholeWheatPete was permanently suspended following a harassment/mass report campaign. A tweet made by @[REDACTED] alleges MaximilianMus was the culprit behind this campaign. Considering he DOES harass Twitch streamers on a daily-basis, this allegation is likely true.

The allegation in question.

More Twitch streamers came forward to call MaximilianMus out for his little trolling shenanigans. One of the said Twitch streamers made the following tweet: https://twitter.com/AnnieOnTwitch/status/1189307817250971653 alerting anyone who streams on Twitch to be careful of that troll.

And for the cherry on top of the cake, more screenshots leaked out of MaximilianMus Discord server showing that he DOES raid Twitch channels whenever he feels like it. 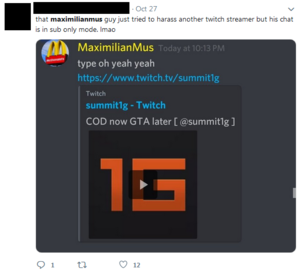 Max tried to raid someone who has his chat set to "Subscribers only".

Many more people had a bad experience with MaximilianMus. He has used sock accounts on Discord to harass Youtubers too.

On the 28th December of 2019, Turkey Tom uploaded a video exposing the vile troll.

The troll spammed several Youtubers with Discord invites, including LtCobra, NFKRZ, iox and Ayy Lmao. Those invites led to videos with a creeper called Bollabong, often shoving a paper with the Youtuber's name inside his anus, then eating it. Furthermore, Maximilian once pressured JMAATV, who was a mentally ill Youtuber, into eating his own feces and cutting off his fingers.

Also, Turkey Tom accused him of trying to get nudes from young girls which coincides with the existing allegation that he might be a pedophile.

Basically, the troll is presumably a pedophile and an all-around sociopath. By the way, he has a friend who is a scatophile.

Max forced a small Youtuber and Discord user called Joan Marie Arroyo Alcon to eat feces while being recorded (As per mentioned by Turkey Tom above). That same Youtuber would upload a video discussing this event. Allegedly, Max had reached out to him and manipulated him for a far longer period of time.

Britbong, another infamous troll, was mentioned and has apparently been harassing him too. It is unknown whether he is involved in this mess or not.

The second coming of the douchebag[edit | edit source]

MaximilianMus was no longer inside anyone's mind for the duration of a year, but he would eventually get exposed for the second time on the 19th of February 2021 by MoistCr1Tikal on a Youtube video. Specifically, this video covers his targeted harassment toward people on Twitch, Youtube and Discord.

To put it simply: MaximilianMus created Discord servers for the sole purpose of sending his lynch mob against random Twitch streamers and Youtubers. Sometimes, he would lure them into his Discord server where he could threaten, mock and harass them even more by using his fans as his personal goons.

The video itself goes into details of the more messed up shit Max has committed. In retrospect, his Fortnite trolling videos were nothing more than harmless pranks while his continuous cyber-harassment is a felony.

Max's fans decided to go after a smaller Youtuber called LukeDoesStuff by creating multiple fake accounts and sending links to his 1000 subscribers special video everywhere on Youtube to make people upset so it gets plenty of dislikes and hate. The video currently has 9.7K likes and 3.7K dislikes. 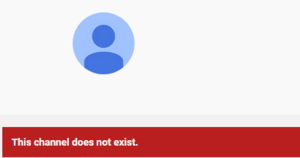 On the 22nd of February 2021, MaximilianMus temporarily deleted his Youtube channel due to the fact that he was bleeding subscribers due to his latest controversy caused by MoistCr1Tikal's rant video. In fact, he lost about 50 thousand subscribers in a single day.

Not to mention, when that did happen, several more Youtubers came forward with their own videos discussing their experience with the troll.

Max would reinstate his Youtube channel later that year after he was relieved to see that no one was talking about him. He believed everyone forgot what he did.

Where Max hides his videos.

His really high-pitched voice most of the time, alongside his mocking tone, makes him pretty irritating. Whether it is done on purpose or not is unknown, but it makes Maximilian noticeably more annoying to other people online. His Swedish accent does not help that case either.

He was accused of being a pedophile: https://www.youtube.com/watch?v=-5e0-R9bCjI (Also see Feud with Turkey Tom and its section right under). Additionally, MaximilianMus admitted to letting child pornography on his Discord servers, which presumably makes him a pedophile, or, at least, an enabler.

Note that both Bollabong and Mr Afilliate could either be trolls attempting to make their victims grossed out and disgusted in the Discord calls or be manipulated by Max.

On the 13th of July 2019, he faked his suicide. It was a terrible hoax that the troll enjoyed doing just to get attention.

It will be assumed his Twitter got banned because of his harassment, until further notice.

He got tired of Fortnite after everyone muted him, so he is back playing Overwatch.

Someone going by the username Maxenz on Instagram was mistakenly targeted because people thought this was MaximilianMus. Here's his post on the matter: https://www.instagram.com/p/CLjLc2QHGnn/