MegaDoopTV, Professor Kuhtoonz, Bro Broman, ToxicStar984 or PKMC is a YouTube troll and former commentary community member. He deleted his own YouTube channels and most videos of his have been archived from other YouTube channels. He started out as a commentary community channel, then turned into a smack-talking ranting troll. People have fallen for his trolling many times which have resulted in commentaries and responses to him.

He is an African-American male who lives in the US, presumably California.

He claimed himself to be "The Ultimate Ranter", setting off implications that he is an egotistical troll.

He has "baited" people into believing he will commit suicide one day. In some sort of attempt to stop them from making videos on him. 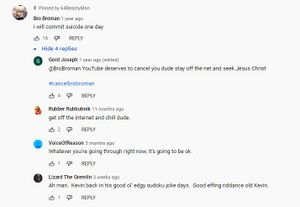 He along with his fans do raid discord servers by spamming the same words, tagging or with gore.

He likes to shit-talk others in his YouTube videos consisting of calling them "autistic", "spergs" or "retards".

In general, on twitter or discord, he resorts by being rude to others, calling them "spergs" or "retards", or telling them to "stfu". He calls others 'retards' excessively to piss people off.

He likes to shout over people.

He is very contrarian in his videos to gain traction and attention, making him a contrarian troll.

He is very arrogant, snobbish and patronizing in his videos, to piss others off.

He has admitted to being a troll

He likes to smack talk other well known popular youtubers like SuperMarioLogan, TheMysteriousMrEnter and people in the cartoon community.

He is very similar to another YouTube troll, by the name of Clay Claymore.

His support for LeafyisHere[edit | edit source]

He defended Turkey Tom and accused Pyrocynical of being a pedophile, for the sake of gaining a reaction and having a contrarian opinion. He also put the 'minor' on the pedestal for the sole reason of being a minor, even though minors are also responsible for their actions, and are capable of doing sociopathic and sadistic things as much as fully grown adults do. Much like Turkey Tom, he has an obsession with accusing people of being pedophiles. 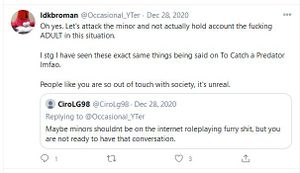 The encyclopedia dramatica article on him unlike most articles on there was actually well documented and (mostly) civilized. It seemed more like ranting on a troll material than bottom of barrel mocking and shit-talking, besides all the racial, sexual, slurs that were shown.

The article was deleted presumably by fans of MegaDoopTV, or Megadoop himself. All thanks to one of our users, a screenshot of the whole article has been saved.

His fans are often very praiseworthy and idolizing of him, they are very similar and egocentric like he is. They are also trolls themselves.

Arguments on discord with other users[edit | edit source]

https://www.youtube.com/watch?v=7NqeZbzH3yI (One of his most popular videos)

https://www.youtube.com/watch?v=qzTMOZSGTQQ (Consists of him calling him a 'retard')

https://www.youtube.com/watch?v=xENHVL9XdV8 (Reacting to Leafy, by another potential communist troll, Darkscythe/Guerilla Enby, who has trolled people in skype calls and discord calls)

https://www.youtube.com/watch?v=ZLhA6Yk3A50 (The Destruction of the commentary community)

https://www.youtube.com/watch?v=M_Xr6ucCFpA (Inconsistent and slow rant, but to the point)

The Problems with MegaDoopTV Part 2

https://commentarydb.fandom.com/wiki/MegaDoopTV (Take this wikia with a grain of salt, it is very much like ED in its immature slurs, despite giving important information about said commentary community members)