This is a subpage of the troll Michael Coombs aka Mikemikev and provides evidence to assist the police that he owns the user @Felicit52636930 (Felicity) on Twitter.

After reported to police Michael Coombs abandoned the account in March 2021 (his last tweets were on 22 February).

In January 2021 the geneticist Adam Rutherford reported Michael Coombs to the Metropolitan police for malicious communications and harassment.[1]

In response to the police report filed against him - Coombs rushed to change his account profile description pretending to be a "trans black" person to mislead about his real identity.[8][9] In response to Rutherford and numerous other Twitter users pointing out the fact he is Michael Coombs - Felicity has falsely claimed there is no evidence and this is "identity speculation".[10] There is though lots of evidence Felicit52636930 is Coombs to the extent if presented in a court of law it is beyond reasonable doubt; this is presented below to assist the police with their investigation and hopefully will result in a conviction. Various other people have also been online stalked, libelled and harassed by Coombs.

Fearful of the legal consequences of his online criminal behaviour in February 2021 Felicity began to outright lie and claim he was not Coombs and said "I don't even know why they think I am this person".[11] It should be noted Michael Coombs is a pathological liar who has a long history of lying about his accounts and impersonating individuals on fake profiles. Because Michael Coombs never tells the truth about his accounts and uses a TOR browser to hide his real IP; one primarily has to rely on behavioural evidence to identify him.[12][13]

On the website The Unz Review Michael Coombs posts as Mikemikev - a pseudonym he frequently uses on many websites. The Mikemikev account on The Unz Review was registered with the email [email protected] (the account can only post using that email). The same email address shows up on Michael Coombs' CV.[15] Therefore there is no doubt the Mikemikev account on The Unz Review is Michael Coombs. Searching through Mikemikev's posts on this website and you can find numerous images he has posted that match what he has uploaded to Twitter on the accounts (including Felicity) he has been harassing Rutherford. A noticeable example is a Ancestry Mapper (AM) graph. 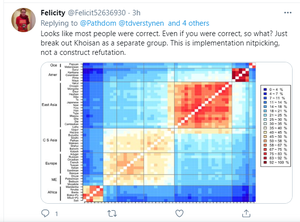 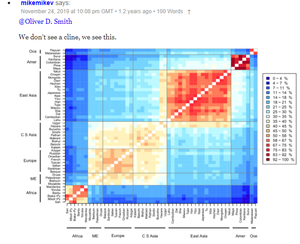 On websites where he posts as Mikemikev linked to his email [email protected] - Michael Coombs shows the same obsession with Adam Rutherford. As an example on The Unz Review Coombs has not only mentioned but attacked Rutherford in his comments.[16][17] Therefore Coombs can be identified on multiple websites attacking Rutherford.

Michael Coombs aka Mikemikev on The Unz Review and Kiwi Farms where he has a verified profile connected to his email [email protected] - uses the same insults as on the Twitter account @Felicit52636930. Furthermore some of these insults and phrases are not too common; in other words, Coombs can be identified with high probability based on his use of particular terminology, examples include his use of the word "quack", calling people "anti-white" and use of phrase "cries out in pain as he strikes you".

On The Unz Review, Michael Coombs aka Mikemikev makes identical arguments with the same (outdated) sources as on the Felicity account.

For example compare these two comments about Blumenbach, Darwin and race or ancestry. 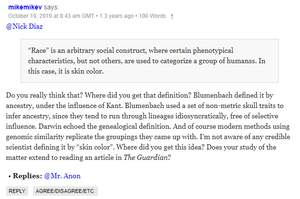 Individual accounts Coombs regularly retweets include Kevin MacDonald,[23] Bo Winegard, Emil Kirkegaard (who he has a history of impersonating) and The Daily Groyper.

Michael Coombs has used the same name Felicity on RationalWiki to attack Adam Rutherford. An admin blocked the account as blatantly Mikemikev.