Michael Coombs has created hundreds of accounts on Twitter to harass individuals and post racism. However, when his real identity is made aware or connected to the accounts - he abandons them (if they're not already suspended by Twitter). In January and February 2021 he was using the account Felicit52636930 (Felicity) to harass Adam Rutherford, who reported Michael Coombs to police for malicious communications. After Coombs realised he was reported to police, fearful of the legal consequences he abandoned the account.

In July 2021 Coombs created another Twitter account (Muslim Elmo) to post racist abuse at English black football players. Coombs is a pathological liar who never admits he owns the accounts and tries to be anonymous. There is however evidence identifying him as the owner of the Muslim Elmo account. Like Felicity, multiples lines of evidence are compiled below including behavioural evidence, use of specific/repeated words and common spelling errors in his tweets linked to separate accounts verified as him on different websites, etc.

On the Muslim Elmo account, Coombs denies the Holocaust and claims Nazi confessions at Nuremberg trials were "false confessions" by torture:

Michael Coombs has a history of writing the exact same thing on multiple forums under his real name and main pseudonym Mikemikev:

Coombs posts the same or very similar obscure/not commonly used images (including graphs) on his different accounts. For example, on Muslim Elmo:

Coombs posted a very similar image on his Felicity account (he abandoned, after reported to police for malicious communications by Rutherford):

Muslim Elmo is identifiable as Michael Coombs based on his followed accounts - as noted by RationalWiki: "Coombs's Twitter accounts are easy to identify: he follows the same accounts including BNP Bexley, Kevin MacDonald, Ann Coulter and Bo Winegard", to this list can be added Noah Carl, Emil Kirkegaard (who he has a history of impersonating), Charles Murray, Steve Sailer, Lana Lokteff and The Daily Groyper, VDARE and Henrik Palmgren. Nearly all these accounts are followed by Muslim Elmo. 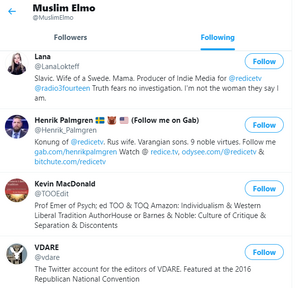