Mr. Demon Slayer, MrDemonSlayerLives also known as The Slayer Of Demons 99 was a peculiar case of a troll, particularly known for his commentaries on certain users in the slideshow commentary community, who turned into a spamming raiding troll who raided people's servers with gore, and spammed vulgar ableist slurs like "sperg", and "mong" multiple times.

Why He Was A Troll/Downfall[edit | edit source]

Mr. Demon Slayer made multiple parody videos on certain individuals throughout 2017-Early 2018, which were basically shit-talking mockeries and strawmans of them. Many of these users included: UriahHeepIsAwesome, The Illogical Reaper/Green Star Productions, and other CC members that he had beef with because he had raided their servers with gore and vulgar insults.

He was a massive edgelord who would often use the words "sperg", "mong" in his server to piss people off. He also insighted his server users to raid other people's servers, by spamming explicit images of gore alongside his friends Frozen Angel, Mr. Reiji'02, KrazyThomps44, UriahHeepIsAwesome/Painkiller99, and CephalicTruth/Machinehead55.

Around 2017, he partook in harassing a user by the name of FarhanTheMovieGuy, who received backlash from the SCC.

CephalicTruth/Machinehead55/Machinehead714 is a narcissistic all-knowing furry douchebag and an Antifa member.

He was a staunch supporter of Donald Trump. 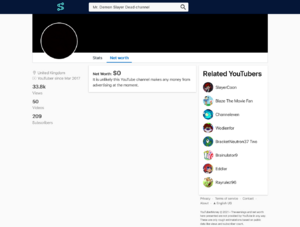 The only available link related to his channel

He had a particular obsession with calling and/or accusing people of being "pedophiles", "mongs" and "spergs", and made parody videos mocking users of the slideshow commentary community by calling them "spergs".

Around 2017, Mr. Demon Slayer on Twitter once complained about a category on his wikia page, when Theryan26 edited the CC article by adding him into the 'troll' category.