Preacher Gerald White is a troll who has harassed several thousand people on Google Plus, developing a reputation as a particularly notorious troll. He is known to use social engineering skills & has doxxed numerous individuals on the site. Some have speculated that he is a hacker.

Why is he a troll[edit | edit source]

He has been harassing, doxxing and blackmailing several people on Google+, sometimes to the point of making them commit suicide and he made several bigoted comments on social medias (farther elaborated below) in an attempt to get a reaction from many different types of people.

He has made racist, sexist, xenophobic, homophobic, antisemitic, ableist, atheophobic and misotheric statements on Google+, Twitter, and in particular, Youtube, seeking attention & instigating conflict with his controversial stances. Additionally, he presents himself as a pedophile and a Christian, leading to actual Christians being blamed for the repugnant, disgraceful actions of this troll.

To summarize, he is hypocritical, hate-mongering troll, who also engages in illegal activity online.

Gerald seems to have been active since early 2012, but ceased all activity in mid-2016. Taking in to account his past Twitter routine @GeraldW27921470, it's likely the troll behind that persona decided to stop posting his sociopathic thoughts & beliefs, and in spite of the unlikelihood, perhaps even getting a life.

There have been allegations that he had been arrested in the past. However, the reason for his arrest is unknown, it is unclear if his arrest stems from someone reporting him for pedophilia or doxxing/harassment.

His online persona is an old man who believes in Jesus Christ and is a Christian Puritan, he hates sinners and animals since they don't have a soul and believes they deserve to burn in hell. Additionally, his online persona is based off a former pedophile who's been arrested, it's probably to parody actual preachers being pedophiles in real life. His profile picture, that is really infamous nowadays, was taken from a stock images website. 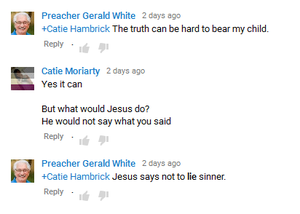 He really likes to use "sinner" as an insult.

Preacher Gerald White was known to make racist, sexist, etc comments on a daily-basis on his profile page and he supported his comments by using Christian stereotypes or taking something out of context from the bible, for instance he made several comments about how animals didn't have a soul and therefore it was "ok" to abuse them and claim they will all be burning in hell. Furthermore, he was known to dox people, blackmail people and eventually harass them as well which caused several of his accounts to end up being banned from both Google+ and Youtube consecutively.

He passed himself off as a pedophile by stalking kids and making deranged statements about them or making deranged comments about said kids on his public profile. Whenever he does not make deranged sexual statements about kids, he goes after other women like a rapist would do, for example whenever he blackmails a woman he often asks her to send him nudes or at least force her to do something else about as grossly humiliating and sexual in nature as humanly possible.

When he was not doing any of the things above, he would be seen discussing with his friends, he was mostly discussing about pretty generic and controversial things such as animal abuse, LGBT rights and Nazism. This behavior can, however, only be seen on private communities and private posts (Thanks to a former troll, We got this information).

If you don't like him and go after him, he'll call you a "sinner", this is one notable trait about him and the other puritans alike.

It is suggested he trolls people both to get a reaction from them and make religious people look bad which suggests in reality he's an atheist that despises Christians. The fact his online persona is a pedophile reflects the fact several preachers were caught as being actual pedophiles in recent years.

Based on his Facebook page https://www.facebook.com/delizchico (http://archive.is/JV624), thanks to https://exposingfaggots.wordpress.com/, his real name is Gabriel Rafael Deliz, he lives in Kansas in the US and he's a Caucasian in his twenties. (This is information that has been available publicly for some time)

He's apart of a Neo-Nazi troll organization called "The Puritans", he's one of the more popular members being highly respected by most if not all the trolls of that organization. The organization itself seems to have died out since late 2016.

The Puritans relocated to Discord to continue their shenanigans since they lost interest in Google+ ever since Preacher Gerald White became inactive and the website eventually shut down entirely.

Preacher Gerald White and several other trolls of that organization managed to make several Google+ users commit suicide in the past few years since a good portion of the puritans love to harass other people on a daily basis and they bragged about that on their personal wiki while saying those who killed themselves were "sinners".

Other notable members of the Puritans[edit | edit source]

Since on their own, they are not infamous enough to get their own page, we decided to include them on this page for the purpose of letting you know they exist. 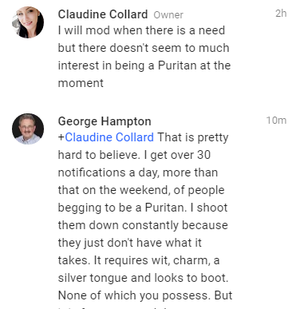 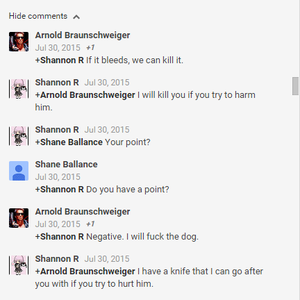 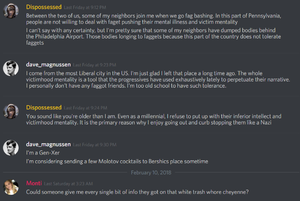 Not all the trolls that are/were apart of The Puritans are listed here, but the most controversial ones and the ones that are the most well respected are all there.

Although he basically owns an organization nowadays, his trolling activities and all his troll friends are highly suggesting he is/was apart of other troll organizations beforehand like "the big cheese crusaders", "trollsquad" and "the big dick bandits" before being the Preacher Gerald White we all know and love.

There are a lot of troll organizations centralized around Google+ and Youtube, but the Big Cheese Crusaders is the organization he was the most likely affiliated with since people there love to make fun of Review Tech USA and make hateful statements that are quite similar to the daily comments made by Gerald/Rafael himself. This is further suggested by the fact several trolls from said organization like TheGameplay Ness and Review God USA joined Preacher Gerald White's circlejerk after all.

The Puritans are so hateful that even Kiwi Farms users hate them out of all people.

At least one of the puritans uses Encyclopedia Dramatica.

There are so many Peacher Gerald White profiles online that it's genuinely impossible to find out which one is the real one. Eventually then, the real one could have lost all his online profiles in the meantime.