Renfamous is a famous Twitter troll (Pun not intended) and one of the main protagonists in the #kickvic campaign. Her main Twitter account accumulates over 10 thousand followers.

There are several things that make her a troll.

Firstly, she is pretty much the person that kicked up the #kickvic campaign (Pun not intended) which appears to be more of a harassment campaign rather than a genuine campaign to arrest/expose a so-supposed "rapist". That being said, if the person concerned is proven to be a rapist, he would deserve to be sent to jail.

Secondly, she worked as a paid troll and a Trump supporter where she would spread far-right rhetoric (Discussed further down below).

Thirdly, she is extremely defamatory in nature and has witch hunt many people, which caused a lot of them to get suspended from Twitter through mass-reporting or leave the platform. Furthermore, she dedicates most of her time to harass and doxx Twitter users online, but the worst thing here is the fact that, despite all of this, she is not permanently terminated from Twitter.

Last but not least, she doxxes people, but whenever she does not doxx people, she uses the doxx from someone else to harass people (The issue is further elaborated below). 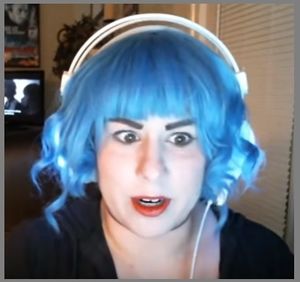 She is a Transgender Caucasian woman, her name is Lauren Copper and she is over 25 years old. Additionally, she frequently dyes her hair blue.

Renfamous has an unhealthy habit of attacking a wide range of Twitter users by massively reporting them, by sending a lynch mob to harass them or by doxxing them.

First and foremost, she is known to harass her detractors (gamergaters/comicsgaters/anyone that disagrees with her or thinks poorly of her) and starts witch hunts against them.

With the help of @SjwSpiderman (Which is probably an alt account), she talks smack about people criticizing her on a daily basis and sometimes referring to them as trolls (The irony) or gamergaters/comicsgaters just to afterward get all her followers and her alt's followers to massively report those users to get them banned and/or harass them. To some extent, she likes to reveal personal information (Such as where they work or live) about her detractors whenever she gets the chance to (See here for an example), which is doxxing. No matter how big or small the deal is, it is still doxxing.

And then, with an additional pinch of irony, she claims that she does not doxx people when she did in fact doxx several Twitter users to either harass them or blackmail them afterward.

Fortunately for her, she does not need to doxx all the time. In fact, several of her friends know how to doxx and Ren will simply use the leaked info about her detractors to harass them instead. 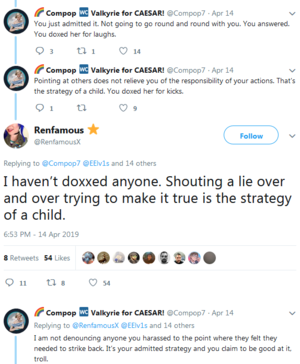 Calling someone a child instead of trying to argue the issue at hand is childish in its own right. 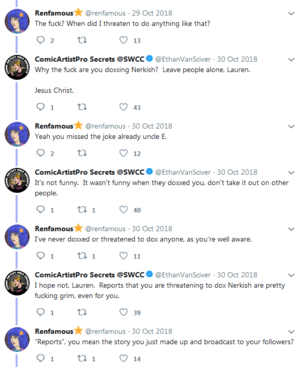 Look guys, a wild troll fighting against a bully on Twitter! 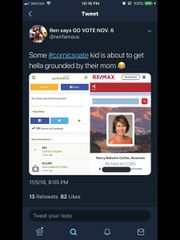 Ren is clearly capable of doxxing. She managed to get a kid's mom's personal information online, although she censored it this time.

To add salt to injury, she has fans and her fans, who are genuine people (Unlike Ren who's obviously a full-fletched troll), do not seem to see Ren as the vile individual she is, but more of an actual feminist that fights for equality and is the victim of trolls while she is one of them and one whom advocates for harassment and doxxing against any form of criticism.

Furthermore, she has not done a single thing that would warrant her the title of feminist or any title that deserves any praise, but she is so good at manipulation that her dafty fans still believe she is the victim of imaginary trolls, gamergaters and imaginary Nazis.

To close this section, she used to work as a paid online troll and a Trump supporter to promote the Republican party's rhetorics. In fact, most of her bigoted past remains available on the Wayback Machine.

Renfamous was a paid Republican with the task of trolling people until they get outraged and she boasted about it once on a series of tweets. So far, before she started doxxing Twitter users whom she disagreed with, she was a troll pretending to be a Republican and trying as hard as possible to annoy people who didn't support the president Donald Trump during the 2016 elections.

Later on, it was found out by a #ISWV supporter that Renfamous had made a series of extremely edgy comments on a website called "perezhilton.com".

Going into her Perez Hilton posse profile, you can already see she made horrible alt-right type posts likely for baiting purposes. 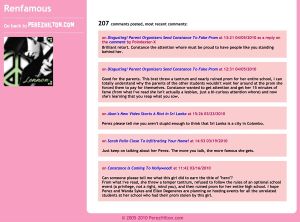 Lastly and probably her least infuriating, yet most recent case of bigotry. Renfamous made a tweet saying that it's okay to be racist and say the N-word because that doesn't make you a part of Comicsgate.

The context of the tweet is that a Comicsgater compared the movement to X-men and all the replies mocking him were infinitely funnier than Ren's racist apologist tweet.

#Kickvic is a harassment campaign made to ridicule and to get to everyone to hate on the voice actor known as Vic Mignogna. It was indirectly started by Marzgurl when she talked about Vic on a tweet made by hanleia and then she made a tweet claiming that Vic is a creep and it blew out of proportions. Ironically enough, hanleia at the time the tweet was made had barely any follower and barely an active profile which hints it might have been a sockpuppet as well.

Everybody involved in this brigade and particularly those with ties with Renfamous will be added there, it has to be noted that not all of the people mentioned here are trolls by definition of the word:

Comicsgate is a term adopted by those who fight for ethics and quality in the world of comics, whether it is warranted or not. However, it quickly turned into a shitshow of the Comicsgaters and the anti-Comicsgaters harassing one another. The name Comicsgate was directly inspired by the hashtag #Gamergate which is a notorious movement for exposing Zoe Quinn and for starting several lynch mobs and harassment campaigns toward video game developers, gaming journalists, and actors such as Wil Wheaton, Brianna Wu and Anita Sarkeesian, just to name a few. Much like Gamergate, the group tends to harass other people to have their deeds done.

Everybody involved in this brigade and particularly those with ties with Renfamous will be added there, it has to be noted that not all of the people mentioned here are trolls by definition of the word:

It all started when Comicsgater ThatUmbrellaGuy got doxxed, the doxxer is not known and there is no evidence that points at anyone for the doxx, but it is argued that Tim Doyle (NakatomiTim) is behind this.

From that point onward, Renfamous started to post plenty of posts about the doxx. Several days later, the mailbox of ThatUmbrellaGuy got smashed and shortly after it was suggested Renfamous was behind this when she acted stupid and said it was a raccoon that destroyed the mailbox, she changed her profile to match the incident while making fun of ThatUmbrellaGuy. 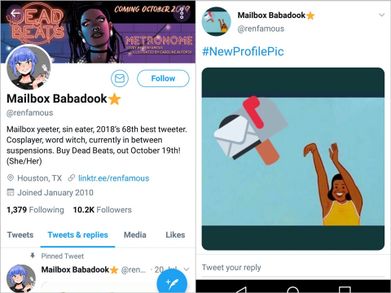 Additionally, she posted pictures of ThatUmbrellaGuy's mom on Twitter to show how much she hates doxxing https://archive.fo/e48YC.

To end the saga, Renfamous' followers harassed someone else that had nothing to do with the incident, only because of his username, he was accused of being an alt account. 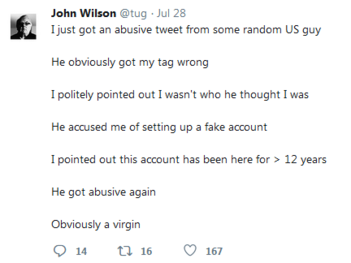 Do not contact this person. He had to deal with enough nonsense with the troll and her goons. 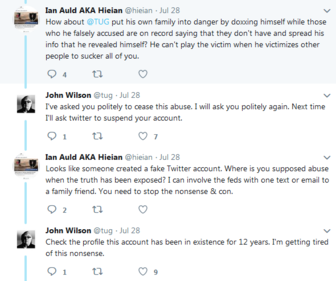 To this day, ThatUmbrellaGuy is still getting harassed and sociopathic trolls like Renfamous keep making fun of his situation. Additionally, he still gets threatened to lose everything, but for the most part, Ren left him alone. This might be updated in the future if Renfamous starts harassing TUG again.

Renfamous was reported to be actively stalking ThatUmbrellaGuy IRL with her alt account, SJW Spiderman.

Not only she stalked ThatUmbrellaGuy around, but another guy (which is likely an alt account exactly like SJW Spiderman since the account was created recently, in August of 2019) that was called Phantom Parody was stalking TUG around and eventually acknowledged where he went. To add more salt into the mix, the alt account changed its own Twitter handle to match ThatUmbrellaGuy's dad date of death which caused an outrage (Also noteworthy: Turns out TUG's wife did the same thing to someone else, there was no outrage for it though. It is scummy either way).

Regardless, after being called out on the incident the account was not banned, but rather it was deactivated by whoever was running the account. Although the account is gone, there was still gossip going around about the account on the Comicsgate side and a lot of people, who actively defended Renfamous' actions, are demonizing ThatUmbrellaGuy ever since the incident happened since they believe he is paranoiac.

Actually, it turns out Phantom Parody had an alt for itself called NightsGotham in order to be able to evade blocks and bans, however, unlike the previous account, this one was quickly suspended by Twitter for harassment. 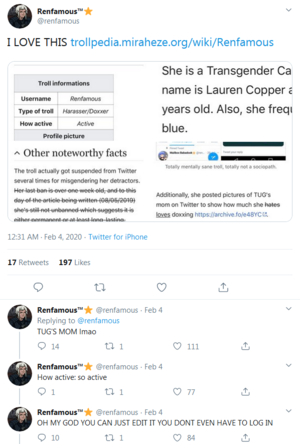 Renfamous posted screenshots from Trollpedia onto her Twitter account on the 4th of February 2020 while the moderators were not active.

That day, she posted another tweet dog-whistling her followers that the page should be vandalized by saying that none of the pages on the wiki are protected against anons since we trust our users to use Trollpedia intelligently instead of wiping out pages or adding in gibberish we let anons edit our pages, not everyone wants to create an account on a website if they won't be active on that website anyway.

That day, there was gossip and rumors surrounding the goal of Trollpedia and over 30 edits were made as an attempt to destroy the article. All of the edits were reverted.

The troll actually got temporarily suspended from Twitter several times for misgendering her detractors.

Funnily enough, she used to make livestreams. That's also the only time ever you can see her face.

She has been permanently banned from Twitter 4 times according to her own claim.

She deleted her old Tumblr blog since, as we have seen here, between 2005 and 2010, she was acting in the most horrible manner possible and that blog could potentially reflect poorly on her. It is unknown what was posted on her old blog.

She insists that anyone critical of her and her behavior is automatically a CHUD and an incel while denying doing any wrongdoing or claiming those wrongdoings are misinformation created by trolls for the sake of defamation. This is a common tactic among trolls to deflect the blame against those who call the troll out.