Shane Sartorius also known as the 4chan hacker, also known as @692, on Twitter or badger on Instagram is/was a troll that hacked multiple Twitter accounts in February of 2019 and who ended up on the news.

Why is he a troll[edit | edit source]

He blackmailed/harassed several people on Twitter to hereafter hack their accounts so they get terminated and he hacked the personal account of mayor Bob Buckhorn just to post profanity and pornography on the account. 4chan as a whole was accused of hacking Bob Buckhorn's Twitter account when they likely had nothing to do with it. 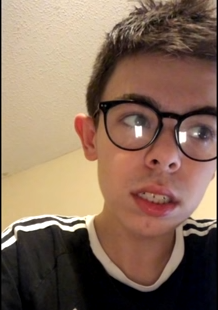 I love your glasses.

His name is Shane Sartorius. He is a Caucasian male likely in his teens, possibly 15 to 19 years old.

Shane was playing Minecraft and one day he suddenly decided to harass Cxlvxn on Twitter for no apparent reason whatsoever after suspending one of his friends, he then proceeds to massively report Cxlvxn to get their account banned.

Moreover, Shane is a sexual child predator that went after several of the victim's friends and unrelated young girls to harass them, blackmail them for nudes, threatening to swat and dox them if his demands were not met. Afterward, he decided to hack the account of someone else who's completely unrelated to him, the drama, the victim, the victim's friends or even Minecraft, he hacked Bob Buckhorn's Twitter account to post pornography and profanity, the account was frozen shortly after by Twitter.

Unfortunately for this troll, the police arrested him according to what the victim said. All of his information were given to the police including his home address, name and online profiles, so he could be investigated.

Before the storm[edit | edit source]

Before being caught red handed, it is worthy to note that troll has had many hacked verified Twitter accounts and created several more Twitter accounts that he managed to verify using exploits to which he uses to massively report Twitter users.

According to another Youtuber, Shane is a member of a subreddit called r/ice_poseidon which was both quarantined by Reddit and made private by the owner, the subreddit itself was notorious for discussing about swatting people.

Another unrelated troll to Shane was outright banned from Twitch for swatting. He is none other than the owner of the aforementioned subreddit.