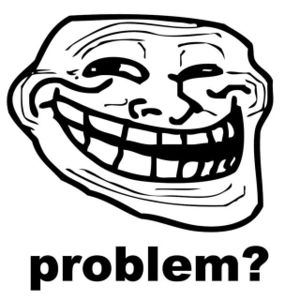 The very first depiction of a troll in internet culture, dating back to 2008. It was drawn by Carlos Ramirez. 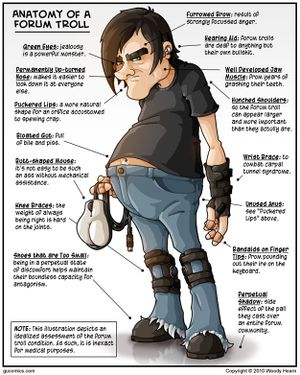 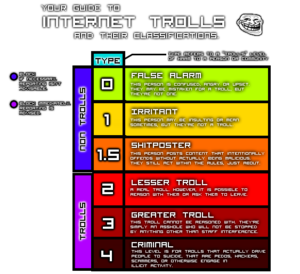 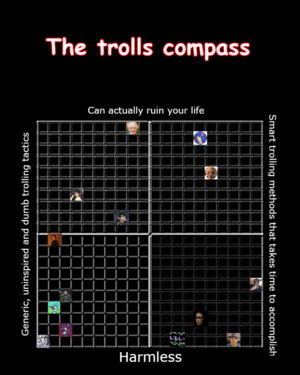 A troll is an individual that enjoys to partake in different online activities in order to either offend you, annoy you or harass you. The latter being the worst type of troll you would ever want to encounter. A good portion of online trolls are sociopathic or narcissistic in nature (this is especially true for those who love to harass other people). Others only troll out of boredom, but in the end they don't do it just to get a reaction from someone else on the daily-basis and are otherwise harmless. It is theorized that the usage of the word "troll" in that context dates back to 1980 in UseNet.

Trolls are widely present in medias, ranging from online comic books (e.g Homestuck) to movies (e.g the Troll movie made by Dreamworks). The first-ever depiction of a troll comes from the Norse mythology around the 16th century in which they were seen as ugly cave dwellers. The first online depiction of a troll was from a comic called rage face comic with the one representing the troll having a very wide grin. Other medias with the troll/trolling trend attached to it is the song "Я Очерь Рад, Ведь Я Наконец Возвращаюсь" better known as "trolololo", made by Russian musician Eduard Khil.

There are several different types of trolls to take notice of.

If a bullet point has an asterisk * then that means the activity is not unique to trolls and can be performed by everyday people voluntarily or involuntarily. If it has two asterisks **, then it is the same as previously mentioned, except the case that it is not a troll and actually genuine are far FAR rarer.

A troll has different known behaviors that must be taken notice of on any written article on Trollpedia whenever possible.

How to spot the troll on forums[edit | edit source]

Ogres
The strong and violent cousins of trolls, they are often portrayed as being taller than them.
Gremlins
Annoying little pranksters who like to pull pranks on random people, generally in enclosed spaces like caves or homes.
Gnomes
A similar breed to gremlins, they dwell in gardens, caves and forests where they play pranks on unsuspecting victims.
Goblins
A similar breed to trolls, but much more malicious, instead of being just annoying, they like to eat human flesh and steal riches.
Onis
Similar to ogres, however, they are most colmmonly considered to be "demons" rather than mythical creatures.
Dwarfs
Wise cave dwellers who like craftmanship.
Broonies
They like to do shores in exchange for food.
Tengus
Eastern breed of trolls, famous in places like China or Japan.

Age range for most internet trolls are from their young adolescence aged 13 to 60s for middle aged adults born in the baby boomer generation, as trolling was not popular nor was the internet existent during the period for the elderly born in the 19th century to early 20th century, people born during that time are not usually trolls. Although trolls can be little children aged 6 to 12, they are not mentally mature or smart enough to process the concept of trolling and logic of internet culture, taken for granted and are usually not taken seriously due to their immaturity, harmless threats, and fall under the category of immature/childish trolls.

It is strongly advised to ignore trolls, just giving them a reaction is what they desire, ranting or responding to them is what they feed on.

Trolling a troll does not work either, and will only make the troll more prone to trolling

See also, the other articles on trolls by Trollpedia! Random page!

The Psychology of Trolling

Admirable Animation #31: "Troll - Shane Koyczan" TheMysteriousMrEnter's video on internet trolls. This video stirred controversy because of his comparison to trolls and cyberbullies, and of course attracted more trolls.